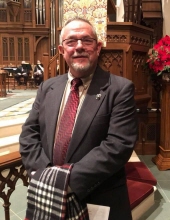 His journey from wellness to immortality was too brief. Let there be no question that God welcomed him and the many who have gone before us with open arms. It is a lonely business for the rest of us without David's heart around.

He loved music, and he heard it everywhere. He wrote and composed the melodies of his mind, both beautiful, rhythmic, and haunting. He learned and played piano from about the age of six, fascinated by the works of Beethoven and Mozart, and others. He studied under teacher Mrs. Head, a neighborhood favorite, and later in Public School Instrumental classes – a fascinating idea for children – highlighting him and others in the school's annual recitals and plays. High School heightened that dimension, bringing music and theater arts together. He had a talent for both. That led him to IU-Bloomington, where he studied (and also learned to party.) While there, he earned an opportunity to try out for "The Met." We'll probably never know what happened to that, but it was those years when trying to understand his motivation was like trying to nail Jell-O to a tree. The United States Marine Corps went the most significant distance in grounding him. His time in that environment was a life-changing experience for him. It's when you know your baby brother is "no baby no more." He left a boy and came back a young man. He knew it and liked it: funny how maturity starts to color the glass and brighten it.

David went to work for St. Elmo's as a bartender. He worked for Harry and Izzy, not the myth but the men. David had immense respect for each of them, their commitments to ritual practices, and standards of excellence. He learned a lot and embraced what he learned. He moved to the family business, you know, "The Great Divide," of course, and joined his father in his vision, of upward movement, for this wannabe prime restaurant in the beloved Lockerbie neighborhood. It wasn't straightforward with either Mr. Ralph (a.k.a. Dad, also a Marine) or the Lockerbie historical folks, but he navigated both. Some noticed he cussed and talked very silently to himself. Still, he built the vision that became Ralph's Great Divide. David richly deserved the accolades that came from some tremendous traditional media outlets such as Bon Appetit, Indianapolis Monthly, The Indianapolis Star (remember that?), and The Indianapolis Business Journal. Let us not forget all local television and radio stations aware of their communities, not to mention the important ones, like The Lockerbie Historical Letter and The Lockerbie Times. No relation, but thank you, Mr. Brooks and others. The restaurant operated as a family, but it was David's creation, hand to God. The rest of us slung beer. Maybe we all do what we do best. Then he brought music along. It was – and forever will remain – among his Greatest Hits.

Most importantly, his kind heart knew and appreciated the many friendships, kinships, and significant relationships he created and developed through the years. He was fiercely loyal, a believer in all things positive. He was generous with the drink but also the serving of a very heartfelt thought, memory, a joke he had heard, or prayer he wanted for you and loved ones. He just knew which you needed. He had an intrinsic ability to see you better than you could see yourself. Who among us doesn't need that sometimes?

David was a Broad Ripple Masonic Lodge #463 Freemason and a dedicated All Saints Episcopal Church parishioner. They were his spiritual destinations, but he carried the depth of his beliefs everywhere he went. David was a humble servant in both locations: at his Lodge, he loved helping feed his brothers and reveled in taking part in rituals; at church, he also volunteered whenever he could, be it as a coffee-hour provider, a greeter, or a member of the Vestry.

He taught piano and appreciated the fresh young minds of his students, spending countless hours looking for ways to educate them while making it fun. He worked once a week with Kenny, a boss turned friend, in the great outdoors, and it provided his fix with nature. Recently, he cried like a baby when he accidentally wiped out a rabbit nest.

We haven't mentioned June yet. She was and forever will be his mother, and boy was she his mother and he, her boy. They loved each other dearly for all of their lives, were each other's sunshine and inspiration. When she no longer cared or knew about her physical appearance, David got into the shower and helped his mom get cleaned up. For that purpose, he wore shorts – for those who haven't gone that route yet.

David's father, Ralph Edward Brooks III, passed in 1994 in a very unexpected certainty, and it was painful. His mom June Wilson, we just mentioned, married Ralph, and we thank her for that; she passed in 2002. It wasn't painful but a blessing, and she needed to get home. His older brother Roger went scuba diving in Bonaire in September 2019 and never came back. Whatever happened, we'll never know.

Truthfully, miserable from his passing are:
· His inconsolable husband, the Frenchman, Didier Bertrand, whose love of David will last him to the end of eternity;
· His sister Lee Anne who eternally cared for and about him. Most of you know her and know better than to mess with David in her presence;
· His treasured friend Christian;
· Dora the mouthy brindle K-9;
· His beloved cousins in Arizona: Janice, Don, Christopher and Wes and pups;
· His sister-in-law Laurie; her dogs, Diesel, and Henry;
· His brother's adopted daughter Kim and her kids; and
· All the loved ones who've always come to our physical and emotional rescue.

For a taste of David’s music, go to davidebrooksmusic.com