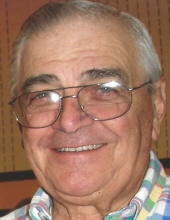 David was called home by God on Saturday May 22, 2021. David was born on December 19, 1939 to the late Robert Alspaugh and Annamarie Poland.

He graduated from Franklin Community High School in 1958. Followed by 2 years at General Motors Institute in Michigan. He also spent a few years in the Army doing basic training and the Reserve. He grew up with his younger sister MaryAnn Weddle. He and his wife Sharon Alspaugh married 36 years, and had a blended family of 6 children, Jeff Alspaugh, Monte Suddeth, Toni Huff, Rex Suddeth, Brad Suddeth, and Cheryl Davis. They also have 13 grandchildren and 5 great grandchildren.

David’s career was in sales and retired from Steward Boarman Kitchens where he designed and sold kitchen and bath cabinetry. He loved playing golf, cards, and telling jokes. Whenever he met someone, he also met them with a joke. David became a 32 degree Mason of the Scottish Rite in 1976, and a member of the Southport Lodge #270. He also was past member and President of The Johnson County Mini Mystics. After retirement David volunteered at the Food Pantry at The Greenwood Social in Greenwood, IN. He and Sharon spent their winters in Myrtle Beach, South Carolina. He was also the member of First Baptist Church of Greenwood.

In lieu of flowers, memorial gifts can be made to The Shrine Hospital for Children.

A Celebration of Life for David will be at First Baptist Church of Greenwood, Saturday June 19th, from 1:00 pm to 3:00 pm
To order memorial trees or send flowers to the family in memory of David E. Alspaugh, please visit our flower store.