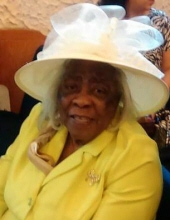 Daphne Ross- Butler born August 21st, 1933; one of 23 children to Nebuchadnezzar and Luella Howard-Ross in Mississippi. Daphne obtained her primary education in Lake Village, Arkansas where she later moved. There Daphne met James Butler and raised eight daughters. They later moved to Indiana in 1970.

Daphne is preceded in death by her parents, one brother, six sisters, and her daughter Kathy. Daphne departed this life on January 17th, 2022, to be with Jesus.