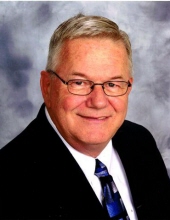 Dan was born to Dan and Frances (Flannigan) Degnan on January 5th, 1943. He was an epiphany as he and his family liked to joke.

Dan grew up the third of four children knowing he was loved by his parents and grandparents. He was the second "Da" in "ElDaDa." He learned his love of vocabulary playing Scrabble in Latin with his Catholic family during his childhood. Dan attended St. Francis de Sales High School in Toledo, OH where he met lifelong friends, the 704 group, and the non-blood uncles he gave to his children and grandchildren. He also met the love of his life, Lynn, in those years. Later he went on to Georgetown University where he met more friends who would become staples for the rest of his life. After graduation, he and Lynn married on August 27th, 1966 and began a family in Toledo, OH while Dan worked on his MBA.

They moved many times throughout their marriage and collected lifelong friends who became family by choice. They had a special way of developing lasting friendships at each stop along their journey.

Dan took great joy in serving his community through Junior Achievement, The Children's Miracle Network and especially Kiwanis. He took pride in passing on the joy of service to his children and grandchildren.

Although the last few years have proven challenging, Dan never lost his smile, his joy in his family or his quick wit and sense of humor.

Dan's spirit will be missed but will live on through those who loved him. Heaven gained another angel - we hope they can handle the humor.

Dan was preceded in death by his parents and his siblings Elaine Fallon and Martin Degnan. He is survived by his wife Lynn, his sister Darrah, his son Dan (Michelle) Degnan, daughter Kelly Degnan-Lauster and his grandchildren Zach Lauster, Charlie Degnan, Emily Lauster, Max Degnan, Sam Degnan and Danny Degnan (the fourth!).

He laughed, he cried, made some great friends along the way and will always be held in our hearts.

The family will receive friends from 1 to 3 PM Friday, August 27th, 2021 at Indiana Funeral Care, 8151 Allisonville Road, Indianapolis, IN. Arrangements will be made for a memorial Mass in the future. In lieu of flowers, please consider a donation to the Kiwanis Club of Battle Creek, Michigan.
To order memorial trees or send flowers to the family in memory of Daniel Donovan Degnan II, please visit our flower store.