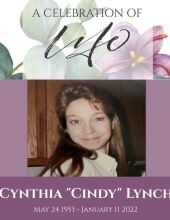 Cynthia Laverne "Cindy" Ledbetter Lynch, 68, of Lebanon, Indiana passed away peacefully at home on Tuesday, January 11, 2022. She gained her wings surrounded by family, friends and the grand-kitties who adored her.

After graduating in 1972 from Monticello High School in Monticello, KY, she served briefly in the United States Marine Corp before moving to Indiana in 1974. She worked in various roles in the powder coating and manufacturing industries. She was an accomplished MIG, TIG, and robotic welder.

Prior to medically retiring in 2013, she served as a Certified Quality Inspector for the welding program at General Devices, Inc. She was known for her passionate advocacy style, resourcefulness, incredible work ethic, thirst for learning and always leading by example.

Cindy loved music, camping, watching movies, and spending time with family and friends. "Go-go gadget Cindy" as she was often called, could fix anything and believed the only limitation to what was possible was one's own imagination. She will be remembered for her strength, kindness, loyalty, fierceness, ambition, compassion for others and the deep love she had for her family and friends.

The bond she had with her family ran deep and crossed generations and lineage. Aunts and uncles were more like second parents, cousins were more like brothers and sisters, nieces and nephews were like her children. This was especially true of the bond she shared with her Aunt Sharon Ledbetter Frost, whom she lovingly called "mom", her cousin Kathy Coffey who was like a sister and Kathy's daughter, Brittany, for whom she loved like a daughter.

Cindy will be remembered most for the immense bond she had with her girls, Stephanie and Kayla. She taught them about strength and perseverance, the importance of family and friendship, the value of hard work, how to balance vulnerability with independence and self-reliance, how to show compassion and give forgiveness, how to love despite differences and how to find their voices. She was a best friend, teacher, cheerleader, confidant, and the place they could find solace. Her love was the armor that sheltered them from the storms. She was a beacon, a harbor, a lighthouse and wherever she was, was their home. The impact of her loss runs deep but her legacy of love is everlasting.

No one ever said mom was “traditional” by any means so it only seems fitting that when celebrating her life we are mixing it up a bit. Due to many factors we have opt’d to celebrate her life in our home where she feels most present and where we can do things “our way”.

We weren’t doing a traditional formal service to begin with so our plan is to break bread together with a nice meal, share some of her favorite tunes, reflect on the memories captured in photographs and share the stories behind them.

We ask family and friends to gather at Kayla’s house in Lebanon, IN this Saturday, January 29th from 11 am to whenever to honor a life well lived. She will be laid to rest at Elk Springs Cemetery in her hometown of Monticello, KY at a later date.

For those that wish to send something, please avoid flower/plant arrangements that may be harmful to pets. Condolences and arrangements can be sent to 809 Claiborne Lane, Lebanon, IN 46052.

ACKNOWLEDGMENTS
A special thank you to our family and family of friends for all the prayers, phone calls/texts, visits and many other acts of kindness shown during her lengthy illness and passing. We are forever grateful to Uncle Kenny, Aunt Judy, Aunt Linda, Aunt Janet, Cousin Brittany, Seth Cook and the Blair family - Stacie and Donnie Blair, Sabrina Blair, Cameron Eisele and Garrett Blair who surrounded us in love and support as she gained her heavenly wings and the days that followed.
- Stephanie & Kayla
To order memorial trees or send flowers to the family in memory of Cynthia Laverne Lynch, please visit our flower store.