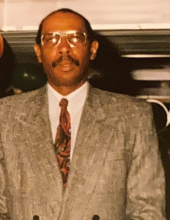 To have known Curtis “Spider” Jones was to know that his life was devoted to his family. This is a brief passage of his autobiography. “Self-written by Curtis”

"I was born December 27, 1940, in Indianapolis, Indiana. I was the first born to Myra Francis Bosley and William Alvin Brown (biological father). My mother worked very hard raising me. I was the only child for ten years. Some of the first memories of my Mother include her working as a nurse at the City Hospital which was known as Wishard/General hospital (now known as Sidney and Lois Eskenazi hospital). Mother was an LPN who worked long hours at the hospital. After ending her career at Wishard Hospital my mother started a new job at Gilford Nursing Home on Delaware Street. My mother was the oldest of eight children born to John and Georgia Bosley.

Mother told me that we first lived together as a family in the now historical Lockfield Gardens from 1943 to 1948. The first school that I attended was Public School #24. I do not recall much about those years. In 1948 my Mom and Dad went their separate ways. The memories of my biological father were not very clear due to my young age. My mother and I moved in with my grandparents, John and Georgia Bosley. We lived with my grandparents for one year and I continued my education at Public School #42, from which I graduated in May 1954. The years at grade school #42 were very sound years. The Social Activities, Sports, and classroom friends that I made at this school have lasted a lifetime. I was a member of the Basketball team, Track team, and Choir. I participated in School Plays and competed in Art Fairs. In 1949, my mother married Harold Jones and we moved into an apartment on Northwestern Avenue. Our next home was on 25th Street, where we stayed until the Summer of 1954. After leaving our home on 25th Street we moved to West 37th Street. The summer of “54” was the start of a New Era in my life. It was like the calm before the storm. It included playing baseball for St. Michael’s in the Riverside League. That Fall I enrolled at Shortridge High School, where I participated in numerous activities. My high school days were full of up’s and down’s. I graduated from Shortridge High School and attended Martin University, IUPUI of Indianapolis, and Oakland University in Rochester, Michigan. In 1956, I was invited to Our Savior Lutheran Church by one of my friend’s and I decided to take him up on his offer. This was one of the best decisions I had ever made. I joined the youth group, became very active in the Youth Choir, and with the church Basketball team. I was Baptized and began to take Confirmation classes. Upon completion of my classes I was Confirmed.

Our family tradition for Thanksgiving and Christmas was to go to my Grandparent’s house for dinner where I got the chance to see all my Aunts, Uncles, and Cousins. Life in the Jones’ household was not easy. I have been working to earn my own money ever since I was ten years old. I started with a paper route. I washed Cars at a service station, shined shoes in a Shoe Parlor, worked at the Coke-a Cola Plant (when it was on Massachusetts Avenue), worked for Sop-n- Shop in the Irvington Shopping Center, and worked at the Kroger’s Bakery on English Avenue. This was the last job that I had before going into the Military Service. I bought most of my own clothing with the money that I made from these jobs. I was also able to buy My First Car…a 1950 Ford Coupe- (O’ Boy!! was she a thing of Beauty); and She was paid for!

After the military service I returned home to Indianapolis and I was hired at Chrysler at the Electrical plant on 30th and Shadeland. During the years that I was there I was able to hold a position in the UAW. When the electrical plant closed on Shadeland, I was transferred to the Kokomo plant. After a few years, a position in management became available and I applied for the position and was appointed Occupational Health and Safety Administrator. I worked in that position for several years. I then took a position at the Foundry in the Power House as a Stationary Engineer. I retired from Chrysler in the year 2000 after 35 years of service.

I was blessed with two children Carla Lynette Jones and Damon Jay Jones from a prior union.

On July 9, 1977, I married Patricia Noel Harris Davis, who was The Cream of the Crop. Patricia was a widow with three boys; Byron D. Davis, Kenneth E. Davis, and James E. Davis. One of our most joyful moments in the household came to us on December 20, 1978, when we adopted a little bundle of joy, a three-month-old Baby Girl who we named Kimberly Noel Jones.
There is no doubt in my mind that these past years have been the most satisfying and gratifying years of my life to which I owe all to my Wife and Children. All these elements have given me the strength, energy, and concentration to pursue all the challenges that have come before me. My success to rise above these past years is a testimony to the dynamic character of my mother Myra Jones, my wife Patricia, and my children.

“Boy’s make sure you take care of your Mother and Sister’s”
I will always be looking down on you with pride and joy
My work is done, and I have gone to rest

Curtis never met a stranger. He seemed to have known everyone in Indianapolis. Curtis loved and was loved by many friends. Curtis better known as “Spider” was a part of a Social and Civic club called the “Swing Masters.” Annually they would sponsor a basketball tournament for the black community known as the “Dust Bowl”. The group of young black men that worked hard in sponsoring the tournament were his cherished friends: Reggie Jones, Glen Bradley, Donald Woods, Melvin Ballard, Bobby Bernard, and Charles Williams.

As a parent of two teens Curtis saw the need for more parents to be present for the after- school activities so he worked with a group of fathers at Arlington High School called “Security Dads.” Curtis was awarded Father of the year for two years while working with the “Security Dads”.

The Governor of Indiana invited the group to Washington, D.C. to receive recognition for the positive impact that was made on the community. While at Arlington High School he joined and worked with the “A-Men” group which was a mentorship program for the development of young black men.

Anyone that met Curtis “Spider” knows that he loved to talk and tell tall stories with the fellas, and he enjoyed seeing people laugh. He was big on giving good advice. He loved to travel to visit with family and friends. His most enjoyable trips were when he would take a fishing trip with his buddies (Ronald Johnson, Jerry Williams, and Albert (Monk) Myers). Spider also loved the sport of bowling. He was on several bowling leagues including a travel team where he won several trophies. Spider’s love for bowling made him the perfect candidate to be on the Board of Directors for the All-Star Junior Bantam Bowling League.

Curtis’ best time of day was sitting in his favorite room with the TV remote in one hand and the phone in the other. He loved watching Sports and World News. He spent long hours having competitive conversations about sports and current events with his cousin-in-law “Phillip” who resides in Kansas City. Of course, all the World’s problems would be solved by the two of them (smile).

God called “Spider” home to be with the Lord on Monday, January 10, 2022, at the age of 81 years, with his loving son James “Pooh” by his bedside. Curtis fought a heroic battle of Endocrine Tumor cancer for 8 years. He is preceded in death by his parents.

Forever cherishing his memory will be his devoted wife of 48 years, Patricia “Tiny” Jones; his children, Carla Jones, Damon (Reese) Jones, Byron Davis, Kenneth (Valerie) Davis, Sr., James Davis, Jr., and Kimberly Jones; his sisters, Georgianna Roney and Aida (George) Cowans; his aunt, Helena Davis; His brother-in-law, Oscar Harris (Lydia) ; sister- in-law Linda Harris; and a host of Grandchildren and Great Grandchildren, Nieces, Nephews, Cousins, and Friends.
Phillip (Buckie) he will not be able to make those daily calls anymore but remember, you became a close friend during the time he was in need. Thanks, Cuz!

Don’t mourn for me but remember me. Keep me in your hearts. I have gone home to be with my heavenly Father.
To order memorial trees or send flowers to the family in memory of Curtis L. Jones, please visit our flower store.