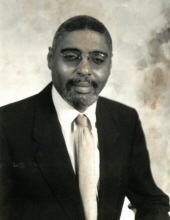 Cleveland Harp aka "Deacon" passed on from this earthly life peacefully on Monday
November 8, 2021 in his home in Indianapolis, Indiana at the age of 87. He was born on
September 2, 1934 in St. Louis, Missouri to his parents Celester Butler (McKinney) and
James Harp. He moved to Indianapolis with his mother at an early age. He was raised to
work hard and respect others. He attended church regularly as a child and came to know
the Lord at an early age.Cleveland attended Crispus Attucks High School and although he
played basketball for Attucks, his first love was baseball. Before his high school years, he
was a bat boy in the 1940's for the all Negro League team "The Indianapolis Clowns" which
at the time was the only baseball team for Negro players. As a kid, he would often waited
outside local hotels for the team's bus to return to Indianapolis so he could see the players
and ask about being a bat boy. He never played baseball in high school or professionally but
followed the sport all his life.
Cleveland did not start out playing basketball as a freshmen at Crispus Attucks because in
his words, "he was really no good at it". At 6'7'' he was skinny, lanky, and very
uncoordinated. It wasn't until his sophomore year with some encouragement that he tried
out for the team under the direction of coach Ray Crowe. He never wanted his mother to
attend any of the games because he didn't want to embarrass her. He would say he
"couldn't catch a ball with his hands" then one day during his senior year during a game in
the locker room he came out a different player. He went on to have a successful basketball
career.
He was drafted by the army briefly but was discharged due to a diagnosis affecting his
vision. Shortly after, he signed a contract with the Harlem Globetrotters right out of high
school playing with them from 1953-1954. He then went on to play with the Harlem
Magicians, a team owned by legendary Marques Haynes. It was Marques who gave him the
nickname "Deacon" because he had the distinguished appearance of a Deacon in the
church. In 1960, he was a showman and coach for the Harlem Astronauts. He eventually
formed his own team called the "Harlem Vagabonds." After 13 years of playing
professionally he left basketball and moved to Detroit, Michigan where he managed several
restaurants and apartment buildings. He returned to Indianapolis and began a 20+ year
career as an usher for the Pacers Organization which was by far a cherished time of his life
because this position gave him a chance just to be himself and really get to know people.
He was often asked by churches and organizations to speak to the congregations and youth
groups about his life. As he got older it became difficult to speak because his voice box was
removed due to cancer. It didn't matter. He would always say he was "blessed" because he
knew all that he had and the opportunities that came along for him were from God and his
son Jesus. He never forgot where he came from, where he had been or where he was going.
At that moment he would often stop and look up to the heavens as if to say 'I owe it all to
the Lord.' He would read from his Bible everyday and enjoyed attending services at College
Park Church.
Cleveland was preceeded in death by his parents. He is survived by his daughter Saberina
Crone, (Barry), grandchildren: Loren Crone (Jessica), Brandon Crone (Morgan), Brittany
Crone, Stephen Crone, Rebekah Crone, Kierstin Crone, Samuel Crone. Cleveland is also
survived by 7 great grandchildren. He additionally leaves behind dear friends and
co-workers from the Pacers organization, lifelong friends from Crispus Attucks, the Indy
community, the Globetrotters, and College Park church.
A celebration of life will take place on Thursday, November 18, 2021 at College Park Church,
2606 West 96th street,Indianapolis, In. 46268 from 11-1 pm, a funeral service will follow
from 1-2 pm with family traveling to the gravesite immediately after service.
In lieu of flowers, donations can be made at the link below:
https://www.gofundme.com/f/support-the-memory-family-of-cleveland-harp?qid=8c697c4932ffa35933ee1705f9cd0cdd
To follow the link. Please copy and past in a search.
To order memorial trees or send flowers to the family in memory of Cleveland Harp, please visit our flower store.