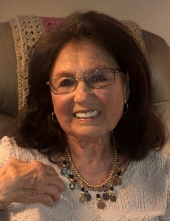 Indianapolis – Christine Hedwig Millard, a longtime resident of Castleton, Indiana, passed away at the age of 87 Saturday, December 25, 2021 at IU Hospital in Indianapolis, following complications from cancer surgery.

Christine was an incredible wife, mother, grandmother, and great grandmother. Her life was one of dedication to her family by always putting them first. She leaves behind two sons and their spouses; Charles Millard, Carolyn (Pearce) Millard and Tony Millard, Karie (Shragal) Millard; two grandchildren, Sean Millard and Charles Millard, Chyla (Stewart);a granddaughter, Khloe Millard; a sister, Ludmilla Lucy; nieces, nephews, their families and many close friends.

Born in Kunau, Czechoslovakia, in the pre-WW2 region of Sudetenland, the daughter of Alois Engelmann and Emeilia (Veit) Engelmann, she lived in Kunau until the age of 11, when in 1945, she and her family were forced to leave Czechoslovakia to become refugees in American occupied southern Germany. There her family was settled in the small town of Westerheim. In 1955 she married Wallace Champion Millard and for 63 years they would celebrate life together. Having married a soldier, she would move her family 10 times in the first 17 years.

Travel would be something the two of them would do for the next 40 years for the purpose of visiting family. They would travel to Germany every other year for many years, make over a dozen cross country drives from Indianapolis to California and later they would fly when driving became too difficult. Apart from traveling she also loved sewing and cooking, but what she loved most was gardening. She would spend hours every day turning her yard into a floral park where family could gather.
In the garden was also where she developed an intimate relationship with the Lord Jesus. She would just have conversations with Him there and would often say she would get this tingling all through her body as the Holy Spirit would affirm her. She also prayed for her family daily often falling asleep on her knees beside the bed and then resuming again when she would wake up. She attended Hazel Dell Christian Church in Carmel, Indiana with her husband and family.

A memorial service will be held January 7, at Indiana Funeral Care, Indianapolis, Indiana, with burial services at Oaklawn Memorial Gardens.
To order memorial trees or send flowers to the family in memory of Christine Hedwig Millard , please visit our flower store.