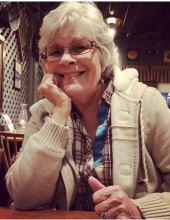 Cheryl Kaye Hanna, age 77, was called to Heaven by the Lord on November 29, 2021 after her valiant battle against cancer. She passed in her home in Fishers, IN with her husband of 59 years by her side. Kaye, as she was called by friends and family, was born June 7, 1944 in Wichita, KS.

Kaye spent her adult life as a “domestic engineer” who took pride in maintaining her home and most of all her garden and flowers. She enjoyed time out in her garden, reading, building computers from scratch, and was even known to enjoy playing video games. She also was an avid animal lover who welcomed many pets into her home over the years. To many she was known as “Mom” even if they were not her biological children. She was a giving soul that would always make sure her children and grandchildren wanted for nothing. Although she left behind many who loved her dearly and deeply, they all take comfort in the fact that she is at peace and no longer in pain.

Kaye is survived by her husband, David Hanna; daughter, Kelly Hanna; her sons, Kurt and Scott Hanna; her sister, Barbara (Larry) Carrow; sister, Patricia (Brian) Paris; her brother, Bill (Marlene) Jones; her granddaughters Christina and Kelsie Hanna; her grandson, Ty Hancock; and her two loving pups, Spike and Sandy. She was preceded in death by her sister, Evelyn Penley; her brother, Robert “Bobby” Jones Jr; and her parents, Lorraine and Robert “Bob” Jones.

As per her final wishes, no funeral service will be held. Her family is planning to host a celebration of life at a later date in the spring.

In lieu of flowers, memorial contributions can be made to the Hamilton County Humane Society at https://www.hamiltonhumane.com/how-to-help/donate/memorial
To order memorial trees or send flowers to the family in memory of Cheryl Hanna, please visit our flower store.