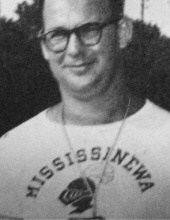 Charles Frederick Fisher was born on June, 19, 1929 to Charles Henry Fisher and Maria(Growl) Fisher in Evansville , Indiana. His soul left us on January, 9, 2020 but his spirit and memory will always be with his family and the Mississinewa Community which he so humbly served for over half a century.

Charlie was a high school standout at Evansville Reitz where he earned 13 varsity letters in 4 sports. He was on the All - Indiana Football High school team 2 years. He was a star quarterback and received several scholarship offers from numerous universities. He went on to attend Indiana University and University of
Evansville on a football scholarship. He was inducted into the University of Evansville Athletics Hall of Fame in 2013.

After college, he was drafted by The Cleveland Browns where Paul Bear Bryant was the coach. He moved to the Mississinewa Community to teach and coach in 1954. He brought much success to the Missisinewa Indians football program where they won numerous championships in his 36 years of coaching. They won over 200 games, and he won numerous awards and honors including being inducted into the Indiana Football Hall of Fame and the Grant County Sports Hall of Fame. Under his coaching, the Mississinewa Football Teams won 13 Conference Championships, 4 Sectional Championships, and 1 Regional Championship. Mississinewa won 7 Conference MVC Championships between 1959-1965 and 9 out of 10 between 1959-1968. He was chosen Chronicle Tribune Coach of the Year numerous times.The football field is named after him, "Fisher Field", with a plaque embedded in a huge rock in his honor. He also helped with the growth and organization of the Three Way recreation sports program in the community. He held political office in the community and was an active member of the teacher's union.

Upon retiring as an educator for the Mississinewa Community schools where he taught Civics, P.E.,Heath, and drivers education for 39 years, he continued to serve the community and attend sports events at the school. He served on the school board for 20 years when he retired at the age of 85 in April, 2014 due to health issues. He loved being out in the community and he loved the people in the Mississinewa Community as they loved him also! He is known to most as "Coach". Charles was also a loving and devoted dad and grandad.

Services will be held at Mississinewa High School in Gas City, IN , Saturday, January 18 at 1:00 pm.Visitation will begin at 11 am followed immediately by the service. Please wear your Mississinewa High School colors! In lieu of flowers, please make donations to the "Charlie Fisher Scholarship Fund", at the Community Foundation of Grant County, 505 West Third Street, Marion, IN, 46952 or at www.GiveToGrant.org/Fisher. All proceeds will go to scholarships for Mississinewa Athletes.
To order memorial trees or send flowers to the family in memory of Charlie Frederick Fisher, please visit our flower store.