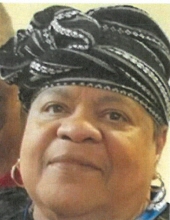 Mrs. Charlester Roberts Jamison was born on December 11, 1948 in Chicago, Illinois in the family home at 1029 North Hudson Street. She is the firstborn child of Mr. Charles Alexander Roberts and Mrs. Dorothy Bell Ogburn Roberts. Although her mother considered naming her Shirley Diane, she was the namesake of her father, as suggested by Aunt Ruby Trice Roberts. When she was an infant, her parents dedicated her life to Jesus Christ at Union Baptist Church in Chicago. Charlester was delighted to win the Union Baptist Baby Contest as a toddler. She attended kindergarten and primary grades in the Chicago Public School system.

Charlester graduated from Indiana Vocational Technical College in August, 1968 with a General Clerk Certificate. Charlester completed additional clerical training at the Airport Skills Center, Manpower Development Program, and the CETA Comprehensive Employment and Training Act. As a result, she was employed by the City of Indianapolis in community programs. She was proud to have worked on voter registration in the Black community and campaigns for local and national Democratic candidates.

Subsequently, Charlester earned certificates as a Home Dialysis Aide, Certified Nursing Assistant, Home Health Aide, Senior Activities Director, and in the Culinary Arts. She was proud to be trained as one of the first home dialysis technicians. She provided compassionate care through employment at local nursing homes, Visiting Nurses Association, Long Hospital, Methodist Hospital, and the Edna Martin Christian Center. She was also employed by the City of Indianapolis, Meadows Motel, Stockholm House Smorgasbord, Riley Towers Restaurant, and other corporations.

Mr. Curtis Calvin Jamison met the love of his life, Ms. Charlester Roberts in 1981, whom he affectionately named his “Doll Baby” and she called him “Dip” because his tall stature required him to dip under the door frames. He was a carpenter and native of Kosciusko, Mississippi who relocated to Indianapolis following his honorable discharge as a Marine. They both attended IVY TECH and soon discovered they lived in the same apartment building on 22nd Capital while walking to school. They married on September 5, 1987 in a beautiful outdoor ceremony at her parents’ home. Curtis and Charlester were best friends for over 39 years and shared the love of numerous creative ventures, such as soul food culinary, music, the arts, carpentry, decorating, puzzles, and walking. Curtis was cool, deliberate, quiet, and had a leisurely pace in his walk and talk. He was the ice, while Charlester was the fire. In their senior years, their needs for special medical care resulted in them living in separate facilities. However the Jamisons visited each other as frequently as possible. Though separated by space, their love and communication remained strong. Mr. Curtis Calvin Jamison, age 72, transitioned to eternal rest at 9:00 a.m. on Tuesday, April 21, 2020 at the Kesslerwood Assisted Living in Indianapolis, IN.

Charlester was a long-term resident of Indianapolis. She explored southern living in Clarksville, Tennessee (her parents’ hometown) but returned to Indy after a brief period. Charlester was an adventurous, lively spirit, with an infectious smile who was the life of the party. In her youth, Charlester was very popular on the club circuit where she won numerous vocal and dance contests. The audiences were always amazed that “Charlie Brown”, as she was nicknamed, was so light on her feet. She was also known for standing up for what was right, and could have a fighting temperament when necessary.

Charlester had a beautiful first soprano voice, and enjoyed sharing her musical gifts throughout her academic career, as well as in various church choirs, traveling gospel caravans, and community theatrical groups. She was proud to have performed in collaboration with well renown groups such as, Robert Turner and the Silver Hearts, Hillside Cultural Center, Soul People Repertory Company, and was a frequent guest on Becky’s Place Radio Soap Opera. “How Great Thou Art” and “The Lord’s Prayer” were among her signature gospel selections, as well as numerous R&B standards. Charlester loved music of all genres. Her artistic talents also included painting, crafts, and home decorating. She was a gracious hostess and talented chef who delighted in creating works of art with food, elaborate table settings, and celebrating every holiday.

Charlester retired at an early age due to chronic medical conditions. She had been seriously ill for the last 27 years. In spite of significantly challenging issues, she was always a fighter and God blessed her to rebound after numerous setbacks and surgeries. For example, in 2011 Charlester had two stokes, two heart attacks, and coded in one day! Yet the LORD allowed her to be healed after living one year in a rehabilitation center. She returned to independent housing for several years. Charlester was truly a walking miracle. She quickly learned to navigate her scooter and motorized wheelchair around her residences and traveled the community via Indy Go Open Door service. She was proud to independently shop, attend events, and keep her medical appointments. Comprehensive services from various senior care organizations enabled her to live autonomously. Charlester was a resident of Bishop Farris Senior Homes from September 2012 thru October 2020, then was at Methodist Hospital for one month. She resided at Hamilton Trace Rehabilitation and Skilled Care from November, 2020 until her passing. There she received services through Heart2Heart Hospice and miraculously survived 8 months in hospice care until her passing at 10:00 a.m. on Thursday, August 26, 2021. Charlester was fortunate to receive the best of compassionate, professional care from health care teams at both providers. Charlester remained prayerful and sought to maintain a positive outlook; yet she acknowledged her transition was imminent. She was looking forward to reuniting with her husband Curtis, her father, and resting in peace with her Lord and Saviour Jesus Christ.

The Roberts Family wishes to acknowledge with deep appreciation the many expressions of Christian love, support, and kindness shown to them during this extended journey and transition of our loved ones. We especially appreciate Pastor Charles E. Bridgewater, Sr., Lady Pamela Bridgewater, and the Living Water Missionary Baptist Church for their prayers, assistance, and sympathy during this difficult time. May God Continue to Bless and Keep You!