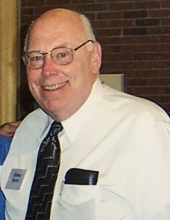 Beloved son, brother, friend and teacher - Charles was born to Edwin and Stella Wyeth on December 26, 1942 in Terre Haute, Indiana. Raised on the Indianapolis east side, he attended St. Phillip Neri Catholic Church.

In 1960, Charles graduated from Bishop Bruté Latin School and St. Meinrad Seminary College in 1964. He studied at the Sorbonne in Paris and received his MS from Indiana State University in 1976.

Known as “Mr. Wyeth” to hundreds of devoted students, he taught French, Spanish, English and Religion at Cardinal Ritter High School (1966-1981), served as the faculty moderator of the Brain Game team and the International Dinner.

From 1982-1984, he worked as the Liturgical Director for St. Thomas Aquinas Catholic Church, where he was a founding member of Dignity Indianapolis.

For more than 30 years, he taught English to foreign students at ELS in Indianapolis, retiring in 2015.

Charles was a long-time member of the Indianapolis Symphonic Choir, and in recent years he sang in the choir at Holy Rosary Catholic Church, reveling in the opportunity to perform Gregorian Chant weekly.

He is survived by his sisters Virginia and Marie, and brothers: Phillip, John and Fred.
To order memorial trees or send flowers to the family in memory of Charles Edwin Wyeth, please visit our flower store.