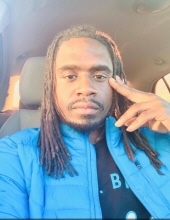 Centino Diante Thomas or “Tino” for short was born December 12, 1994, to Shannon Renee Harris. He professed his love for Christ and was baptized at a young age. In his much younger years, he was full of life and greatly enjoyed; drawing and sketching, playing video games, swimming, music production and recording, and festive family get togethers. Growing up during the” social media “and “digital age “, he quickly developed a passion for what is now known as “content creation”. Very savvy with emerging technology and trends, Centino learned to develop and integrate video and music and media, which ultimately lead to the creation of entertaining short videos he would share with family and close friends. Through those passions and talents of the arts, he intimately became known by his close family and growing circle as “Tino” or “TMan”. By this time in his life and with the help of his cousin JaSean Harris he had really began focusing his efforts on full scaled musical production and recording. Determined to push his dreams of musical success, he formed a partnership with JaSean and created what was known as “Swag Rite Entertainment “Through a collaboration, a host of local artists and producers emerged, and set the stage for the music company which stands today known as Juug Forever. JaSean Harris proceeded Centino in death (2019) and JUUG Forever in collaboration with OTW Records proceeded to go on producing talents, leading to the 2020 OTW/Juug Forever, RIAA certified 2X Platinum Production for song “Camelot” and a 26+ week run on the billboard charts. He is survived by his mother Shannon, his bonus dad Shaun Harris, brother Elijah, his grandparents, and a host of aunts, uncles and cousins.
To order memorial trees or send flowers to the family in memory of Centino Diante Thomas, please visit our flower store.