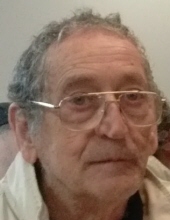 He was born on Friday, October 23,1936, to the late Henry and Restine (Burton) Chocklett-Adkins in Roanoke, Virginia where he spent his childhood. After High School he enlisted into the U.S. Army and served 4 years. He moved to Indianapolis, Indiana in 1965 with his wife Mary M. (Martin) Chocklett.

Cecil loved fishing, playing cards, especially Texas hold em and going to the gambling boat whenever he could. His greatest love was spending time with his grandchildren. He taught each one of them how to swim and more importantly, how to drive. He would sneak off with one of them to learn to drive and would always end up at Steak N Shake, Rally’s or some other fast-food chain.

Memorial donations can be made to Parkinson's Foundation either online at https://www.parkinson.org/ or at the funeral home.
To order memorial trees or send flowers to the family in memory of Cecil G. Chocklett Sr., please visit our flower store.