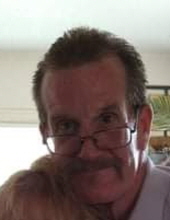 Carl E. McCormack, 58, Indianapolis, Indiana died peacefully in his sleep at home on Friday, November 5, 2021, with his wife by his side after his short battle with cancer. He was born on December 28, 1962, in Texas City, Texas.

Carl is preceded in death by his father, Edward McCormack; his brother, Michael McCormack; and his sisters, Bonnie Walsh, and Roseann Willett.
Carl is also survived by his and Tammy’s three fur babies whom he loved dearly…Lucy, Maggie, and Bruno.

Carl was a jack of all trades who prior to his illness was always tinkering on one thing or another. He was passionate about his work and always wanted whatever it was he was doing to be the best it could be. His favorite pastime was fishing. He will be remembered for being a kind soul, the type of guy who always helped others and would give the shirt off his back to anyone in need. His constant smile and jokes will be dearly missed.

Memorial service will begin at 4:00 pm.
To order memorial trees or send flowers to the family in memory of Carl E. McCormack, please visit our flower store.