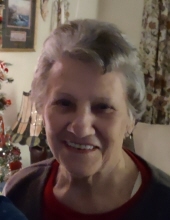 Betty Sue Williams, 79 of Shelbyville, IN passed away on March 11, 2022. Betty was born on May 9, 1942, in Blackey, Kentucky to Henry and Lucinda (Fields) Eldridge. Betty moved to Indiana in the mid 1960’s. She met and married the love of her life, Jodie Williams in September 1960, and they later had one son.

Betty worked at the Coca Cola Bottling Company in Shelbyville until they closed. She worked at IPC Rubber Molding Factory for approximately ten years. She later worked at Target Department store, where she retired in 2002. Betty also volunteered at Hospice Thrift Store in Shelbyville. She was a wonderful homemaker who enjoyed gardening and spending time with her family. Betty was diagnosed with Alzheimer’s thirteen years ago. She remained at home in the care of her son Larry, daughter in law Juanita and her beloved cats, “Momma” and “Wink.” Betty remained active until recently and was able to enjoy outings with her family. She loved shopping, eating out and attending school activities of the grandchildren. She also went to Kentucky to visit sisters and family.

Donations in lieu of flowers may go to Alzheimer’s Association of America.
To order memorial trees or send flowers to the family in memory of Betty Sue Williams, please visit our flower store.