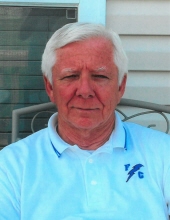 A father of eight, grandfather and great-grandfather, he loved nothing more than having family around the dinner table, especially if fried chicken was on the menu. Even then, he would try to keep one eye on the TV if Purdue, Kansas State, the Kansas City Royals or the Atlanta Braves were playing.

Bernie was born June 26, 1941, in Great Bend, Kansas, to B.L. and Ruby L. Gilmer. His older brother, Jimmie D. Gilmer, encouraged him to play sports and chronicled his achievements over the years on the baseball diamond, the football field and the tennis court. As an adult, Bernie introduced many friends and strangers alike to fast-pitch softball, organizing and playing in leagues in Indiana and Illinois.

He got his start in journalism as editor of his high school newspaper and went on to earn a degree in technical journalism from Kansas State University. He enjoyed a long career as a sportswriter and newspaper editor, working for papers in Kansas, Illinois, Florida, North Carolina and Indiana, including The Shelbyville News and The Indianapolis News.

His passion for sports spilled over to many of his children, and he would move heaven and earth to be present to coach, keep score or simply watch them play baseball, basketball, football, softball and tennis.

He loved a good road trip with a Boxcar Willie soundtrack, sometimes cramming kids and bikes into the car for trips to Kansas for the annual Wheat Bowl Football Classic, a preseason bowl game that he and his brother developed in the mid-1990s.

Later in life, he launched an online newspaper in Franklin Township, continuing to cover high school sports and other community news. He served as grand marshal for the Franklin Central High School Homecoming Parade in 2009 and later received the Todd L. Cougill Award for contributions to Franklin Central athletics.

Never one to stop working, he wrote and published several books over the past decade and participated in the Indiana Author Fair in 2018.

Bernie was a champion storyteller. While his kids joked that his stories never seemed to end, friends and strangers alike appreciated his sense of humor and his uncanny ability to find a connection with just about anyone at any time.

He served his country as a member of the U.S. Army Reserves in Manhattan, Kansas, and the Alabama National Guard. He learned to cook in the Reserves but soon convinced his commanding officer that he was more valuable behind a typewriter than behind a stove.

Bernie was preceded in death by his parents, his brother and his grandson Dustin Gilmer. He is survived by his wife, Maureen; his children, Kelby (Amanda), Archie (Pamela), Garrett (Ryan), Sara Wuczynski (Bryon), Erin, Evin, Ellen (David Lohr) and Ethan Gilmer; eight grandchildren, one great-grandchild; and two nieces, Leslie Wayman and Lindsey Pendry.

Services will be Monday, March 28, at Indiana Funeral Care, 2433 E. Main St., Greenwood, Indiana. Visitation is from 2 to 4 p.m., with a memorial service beginning at 4 p.m. Interment of ashes is planned for a later date in Great Bend, Kansas.