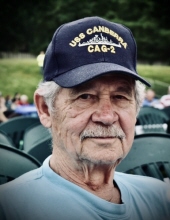 Benjamin H. Miller
Benjamin H. Miller passed at home in Westfield Indiana on Monday, November 8, 2021. He was 81 years old. Ben was born on June 1, 1940 in Plymouth Pennsylvania to Harry and Phyllis Miller. He is preceded in death by his parents and sister, Marlene Stasukinas. He is survived by his wife of 62 years, Shirley J. Miller (nee Kirschner), his two daughters and their families including four grandchildren and 5 great grandchildren: daughter Dr. Brenda and Joe Gaydos, grandson Ben Gaydos, granddaughter Paige and David Sanning, great grandchildren Lily, Ella and Luke Sanning, daughter Donna and Mark Sedlack, grandson Matthew Sedlack, granddaughter Amanda Etchetoe, and great grandchildren Jacob DeMayo and Gweniver Etchetoe.
Ben graduated from Plymouth High School where he was a local football hero. He was captain of the Plymouth football team and lettered all 4 years. Pictures of him in his football uniform and newspaper clippings could be found in some local establishments for decades. In addition to a commitment to athletics, he had a strong sense of duty to country. He entered the Navy Reserves while still in high school. He married his high school sweetheart, Shirley, after graduation on June 13th, 1959, and days later he left for active duty on the USS Canberra CAG-2. During his service, he earned the rare title of Golden Shellback which refers to sailors that crossed the equator at the International Date Line.
Ben retired to Florida at age 67 after a 41-year career at Signode, a subsidiary of Illinois Tool Works (ITW), where he was the South Eastern Regional Manger responsible for the team that supported equipment across multiple states. He had an intuitive ability to fix almost anything, and served as a resource not only for his team at ITW, but also for his neighbors. People would often come knocking, asking if Ben could give them advice on anything from appliances, plumbing, electrical or mechanical systems. He did not turn them down. He was also the local computer go-to guy. Computer Science was one of his hobbies. He enjoyed building computers and writing custom software. Some of his custom software was used at ITW.
Throughout his life, Ben enjoyed the outdoors. He loved to hunt and fish. He spent many weekends teaching his daughter’s essential life skills such as how to throw a football, how to shoot, the proper way to cast a rod, bait a hook and clean a fish. Later in life he became a big fan of Disney World. He took great joy in his grandchildren and loved to take them to the park. He and Shirley spent many happy evenings dinning and strolling through Epcot.
A memorial service will be held at 3:00 pm, Thursday, November 18th, at Indiana Funeral Care, 8151 Allisonville Rd, Indianapolis. Family calling will be from 2:00-3:00.
To order memorial trees or send flowers to the family in memory of Benjamin Miller, please visit our flower store.