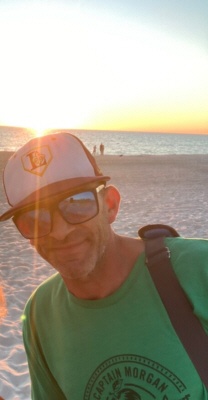 Benjamin Joseph Gatlin (47) of Indianapolis, passed away at his current home in New Whiteland on April 28, 2022.

Ben was born in Kankakee, IL on July 29, 1974, to Lloyd Anthony Gatlin and Marla Janine (Miracle) Gatlin. Ben lived in Springfield, IL before moving to Indianapolis in December 1987.

His first job was at Maple Creek Golf and Country Club which lead to his life long passion for the sport. He lettered in golf at Warren Central High School where he graduated in 1992. While at Warren Ben was active in the Nazarene Church, wrote poetry and played trumpet. He also held lifelong loves for music, dancing, comedy and Motorsports.

Ben is preceded in death by a daughter, Olivia Josephine Mack, his mother Marla, his aunt Marva Miracle, and his maternal grandparents Rev. Walter and Sharon Betty Miracle. On his father's side grandparents Agnes (Gatlin) and Jose Pourroy, along
with uncles Victor Pourroy, Paul Gatlin, and aunt Vera Lynn Pourroy passed before Ben.
He is survived by his children Benjamin Joseph Gatlin Il and Madison Danielle Hall, his granddaughter Saylor Jo Bender, father, Lloyd, his sister Natalie Perkins (Brian), and nephews Cole and Caden Perkins.

In lieu of flowers, donations can be made to Shriners Hospital for Children.
To order memorial trees or send flowers to the family in memory of Benjamin Joseph Gatlin, please visit our flower store.