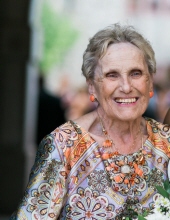 Audrey Wright of Indianapolis, Indiana passed away on August 26, 2021. Dynamic, warm, funny and kind, Audrey gave so much of herself in love and devotion to her family and others; her children are grateful she passed away peacefully and on her own terms. One of Audrey’s last directives was that at her passing, the family publish only a death notice. We pray with love that she would accept this “long form” format.

Audrey was born on July 31, 1935 in Binghamton, New York, the only child of Doris Dorman Stevens and James Stevens. Doris and James divorced when Audrey was still a young child and she was raised by her mother and grandparents, Elva and Birdsall (Bert) Dorman, Jr. Elva and Bert owned Bert’s Grill, a restaurant in Binghamton. Audrey had a genuine “the more, the merrier” attitude and skills in enhancing or extending any recipe that the family attributes to her years of doing homework at Bert’s alongside her mother and grandparents. Audrey was athletic, becoming an accomplished swimmer, golfer and ice skater. Even decades later, she could draw “oohs and aahs” doing pirouettes on the ice.

After graduating from Binghamton Central High School, Audrey moved to New York City where she graduated from the Lenox Hill Hospital School of Nursing, and then began her career working as a registered nurse at Lenox Hill. There she met her future husband, James Claris Wright, M.D., an intern. Jim and Audrey married in October 1957. Jim and Audrey had their first child and worked and lived in New York until 1961 when Jim’s fellowship in Pediatric Endocrinology at Johns Hopkins Hospital took them to Baltimore. A few years and a second daughter later, Jim and Audrey moved to the Chicago area for Jim’s job as Director, Clinical Research Center, at the Illinois State Pediatric Institute. In June 1969 and three more children later, Jim and Audrey moved to Indianapolis when Jim began his work as Director of the Pediatric Endocrinology Department at Riley Children’s Hospital. Indianapolis grew on Audrey slowly, but by the mid-1970s she had become an enthusiast. Indy was home.

Perhaps Audrey’s favorite teaching moments raising her five children were those when she implored them to “use your common sense,” as she believed common sense embodies not just the practical, but also fosters compassion and empathy. To Audrey, developing and trusting one’s own common sense was key to successfully resolving any conflict or overcoming any obstacle. Audrey herself was capable of seemingly everything. Somehow she needed only duct tape, a paper clip and a piece of string to make most things work.

Audrey returned to work outside the home as her children all reached junior high school and beyond, first working as a nurse to a dentist, Dr. Joel Sagalowsky. Audrey’s remarkable professional impact, though, happened through her 20 year career beginning in the 1980s at St. Richard’s Episcopal School, where she served as the Administrative Assistant to the Head of School and School Nurse. The school’s executive team, faculty, parents and students all took to her magnetic mix of straight talk, many competencies, sharp and sometimes silly humor, and endless kindnesses. A past parent tells the story of her daughter when learning Mrs. Wright was on vacation, asking, “But who will rule the school?”

Audrey will be interred during a private service for family at the Columbarium at Trinity Episcopal Church, Indianapolis where she was a parishioner for 52 years. Memorials in honor of Audrey may be made to St. Richards Episcopal School (www.sresdragons.org) or the Riley Children’s Foundation (www.rileykids.org). Indiana Funeral Care is entrusted with final care and arrangements.
To order memorial trees or send flowers to the family in memory of Audrey Stevens Wright, please visit our flower store.