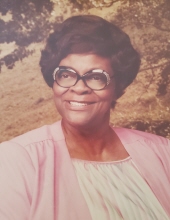 Artilla King Justice Dogan Leving the daughter of Mr.& Mrs. William King was born February 4,1921 in Chicago, IL. She was raised by her father and his wife Mrs. Leola King both of whom predeceased her and whom she dearly loved.

Artilla married Mr. Bernard Leving they shared 50 years of a wonderful loving union, traveling around the United States and Canada until he passed away in 2004 at age 93.

She moved to Indianapolis in 2005, after the passing of her husband and at the persistence of her son W Rondal Justice who passed June 20, 2006, a year after her move, she was heartbroken.
She lived in Indianapolis, IN in her apartment until she physically no longer could, she then came to live with her daughter in law Sharon A. Justice where she resided until her passing.

Artilla began her professional career at American Airlines where she worked in the food service department, she later changed careers and became an Administrative Assistant Clerk for the city of Chicago at the Cook County Courthouse, where she worked until her retirement in May 1987.
She was actively involved in Democratic party politics and served as a precinct captain many years in the City of Chicago in her district.

Artilla lived a long eventful wonderful life and will be dearly missed.
To order memorial trees or send flowers to the family in memory of Artilla King Justice Dogan Leving, please visit our flower store.