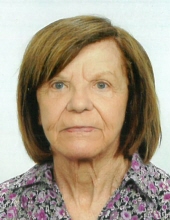 Anne Philomena Paige, left this life on October 14th due to the combined effects of dementia and a crippling stroke. She was born during the Great Depression on a small farm near the village of Plum Bridge, Northern Ireland, the fourth of ten children of Mary and Thomas Nicholas. Upon graduating from secondary school at age 17 she followed in the footsteps of three older sisters and emigrated to New York City where she eventually served as the Executive Secretary to the medical Director of Blue Cross/Blue Shield of NY. She married her husband Gene of sixty-one years in 1960 and moved with him where his career took him; to Miami, back to New York, and eventually here to Fishers. She was an avid tennis player and active in church and family affairs. Anne leaves behind her husband and their three children, daughter Pamala Ridout, sons Kevin and Barry, and seven grandchildren. Also surviving are five brothers, three of whom still live in No. Ireland. Visitation will be at Indiana Funeral Care, 8151 Allisonville Road, Indianapolis on Thursday, October 21st from 6-9 p.m. Anne will attend her final Mass St. Louis De Montfort Church in Fishers on Friday, October 22nd at 10 a.m. followed by internment at Our lady of Peace in Indianapolis. There will be a brief visitation at the church prior to mass. The family thanks the caregivers at BrightOn Hospice for the professional and loving way they took care of her every need in the final year of her long and fruitful life.
To order memorial trees or send flowers to the family in memory of Anne Philomena Paige, please visit our flower store.