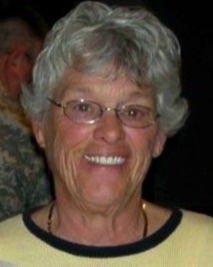 Anne Lynch Hamlet, age 83, of Indianapolis, passed away at home after a nearly 3 year battle with cancer on Tuesday September 27, 2022.  Anne was born August 2, 1939 to the late Byron A. Lynch and Faye M. (Vest) Lynch in Scottsburg, IN.

Anne is a graduate from Speedway High school, Indiana University, and Franklin College. After graduation, Anne went into education where she spent a majority of her years with Decatur Township schools.  Her fondest teaching memories are from the years she spent at Decatur Central Alternative school. After retiring from education, she decided to work part-time at Lowes where she enjoyed working in the Lawn and Garden department with new found friends.

Throughout her life, Anne was involved with many activities. While growing up, Anne was a member of Job’s Daughters Speedway Bethel chapter #38 and is the 1965 Past Grand Bethel Honored Queen. She was also involved with her children’s activities including coaching sports, athletic boosters, and a former Ben Davis Band booster president.

Anne is survived by her son Scott Hamlet (Marnie); her daughter Amanda Hamlet Griggs (Andrew); her granddaughters Emma, Sarah, Lauren, and Gabby; and her beloved dog, Jasper.  Anne also leaves behind additional family and close friends.  She was preceded in death by her parents and her son, Jay Hamlet.

Services  will be Thursday Oct 6, 2022 at Indiana Funeral Care, Castleton chapel Visitation is  from 11- 1, followed by the funeral.  In lieu of flowers, donations can be made to Indy Humane society or Gleaners Food Bank.

To order memorial trees or send flowers to the family in memory of Anne Lynch Hamlet, please visit our flower store.