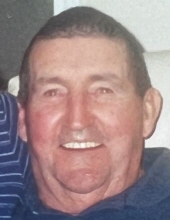 He was born Thursday, May 7, 1925, in Hartwell, Ohio to the late Henry Winfield and Mary Elizabeth (Carter) Wood. He moved to Sharonville, Ohio after first grade and stayed there until he was drafted to the US Army in 1943. He was very proud to serve our country and was enlisted from 1943 until 1946. He was stationed in Normandy during WWII where he was a Scout and Rifleman. His rank was Private First Class. He earned a Purple Heart, European Theater Operation with two Bronze Stars, Rifle Marksman, Combat Infantryman Badge, Good Conduct Ribbon, and Victory Medal. He was honorably discharged in 1946 and was sent back to Camp Atterbury in Edinburgh, Indiana where he met June Mardis. They married April 19, 1946.

He worked for Arvins in Franklin and Schweitzer’s Turbo Charges in Indianapolis. He went onto be a Mechanical Engineer for AM General in Indianapolis and later retired from there.

Andy loved to bowl and earned many trophies over the years. He was also a pro golfer. In 1968 he was Club Champion and in 1980 he was Senior Gold Champion both at Hillview Country Club and earned many trophies. He also enjoyed woodworking and loved to sing. He was also a member of the VFW in Franklin, IN and a Mason for over 50 years.
Andy is survived by his loving wife, June Mardis Wood; sons, Andrew Mardis Wood (Kathy), VL Vawter (Martha), Roger Chung; grandchildren, Andy Wood (Leslie), Kelly Edwards (Greg), Christine Chung, Paul David Chung (Sarah), Michael Vawter; and many great grandchildren.

He is preceded in death by his parents, siblings, Raymond, Donald, James, Eugene, Juanita and Doris.

Masonic service will start at 11:45 AM

To order memorial trees or send flowers to the family in memory of Andrew Hershel Wood, please visit our flower store.