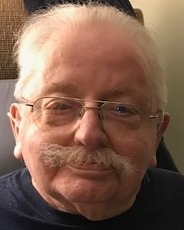 Residing in Fishers, IN for the past three years, Al previously lived in Anderson, IN from 1986 – 2019, but spent his childhood and earlier adult years in his home town of Indianapolis. He retired from the U.S. Postal Service in 2001, after more than 35 years of meritorious service.

Al graduated from Manual High School, Indianapolis, in 1959. He was an avid Indiana University Football and Basketball fan, and enjoyed all Big Ten sports. He also enjoyed following both college and professional ice hockey and was a recent convert to lacrosse and Australian Rules Football. In his teen years and early adult life, he served as Team Manager for various high school and local league teams such as Indy Bears Football. He was a lifelong Chicago Bears devotee, but he somewhat grudgingly learned to back the Colts as well, once they moved to Indianapolis!

In addition to his love of sports, Al was a true music aficionado, enjoying a wide and eclectic variety of genres, from classical and baroque, to jazz and blues, to classic rock & roll, to 70’s pop. Among his favorite composers and performers are: Mozart, Beethoven, Duke Ellington, Dave Brubeck, Ricky Nelson, Duke Tumato, Delbert McClinton, The Grateful Dead, The Allman Brothers, Little Feat, Steely Dan, Abba, and even Japanese electronics musician Kitaro. Al was also a movie buff, embracing everything from mid-century noir to sci-fi. He loved the old classic comedy of W.C. Fields, Charlie Chaplin, and Laurel & Hardy. He and Maribeth shared a love of “cult” classics such as “Robot Monster,” “The Ghost of Dragstrip Hollow,” “Plan 9 From Outer Space,” “Eraserhead,” and “Reefer Madness,” to name a few.

Extremely well-read, Al had a vast knowledge of both World War II and the American Civil War; he was especially knowledgeable about the life of Abraham Lincoln. He enjoyed reading biographies, especially those of sports figures.

Al’s kind, loving heart and his slightly off-beat sense of humor endeared him to many. His friends are legion, both near and far. For a “small” personage (he stood only 4’6” tall), he was certainly a big man who touched many hearts in many ways over his many years.

There will be no formal funeral service at this time; a celebration of Al’s life may be held at a later date. The family asks that no flowers be sent. Anyone who wants to commemorate Al’s passing is encouraged to make a donation to the charity of their own choice, in remembrance of him.

To order memorial trees or send flowers to the family in memory of Alvin Wayne Pittman, please visit our flower store.