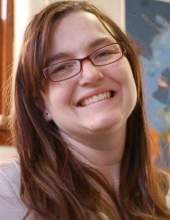 Allison Attended Hamilton Heights High School where she graduated. She also attended higher education and earned her license in Medical Tech after graduation. She worked in Noblesville Pediatrics prior to the birth of her first child, Owen. She became a full-time mom. Her most recent job was working for Dawes Fretzin Dermatology, but due to health reasons had to leave. Allison was an earth child and felt more at home wandering in the woods and in nature. She was an avid reader and wanted to go back to college to get her degree in Anthropology. Ultimately, she had wanted to become an archeologist and discover the world. She took belly dancing, was interested in SCA events and historical events. She had a large heart and loved animals and her children with all of her heart.

Service entrusted to Indiana Family Care, 8151 N Allisonville Rd, Indianapolis, IN 46250 on Friday April 1, 2022 visitation from 2-5 for family and friends.

To order memorial trees or send flowers to the family in memory of Allison Israel, please visit our flower store.