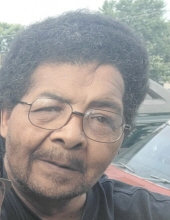 Aaron Dean Johnson passed away on January 24, 2022. He was born February 19. 1953 to Thomas Clyde and Dorothy Perkins Johnson.
Aaron graduated from RSH, served in the army and had worked for Wayne Works for many years until they closed. He also drove trucks for Celadon trucking, enjoyed bowling, shooting pool and had been a member of the Rough Riders motorcycle club.

He is survived by three sisters: Selma and Vivia Johnson of Richmond and Tonoa Johnson of Dayton. One brother, Virgil Johnson of Austin, Texas, and his longtime companion, Creta Shearer, and a host of nephews and nieces. Aaron was preceded in death by his parents, three sisters, Ora Jean Kidd, Pamela Mayberry and Novia Johnson. Four brothers, Alvin, Larry, Jerald, and Kimothy Johnson.

He requested no services.
To order memorial trees or send flowers to the family in memory of Aaron Dean Johnson, please visit our flower store.