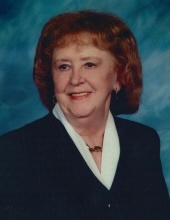 A. June King’s incredible spirit passed from her physical body to be with her Lord and Savior on Thursday, March 17, 2022, in Greenfield, Indiana. She was 90 years old.
June was born on June 15, 1931, in Knightstown, Indiana to the late Beatrice M. and Roy J. Webber.
She married Carl Colip in 1947 with whom she had seven children. Carl and June later divorced. In 1982, she married Royce King, gaining three stepsons whom she loved as her own.
June worked many years as a bartender at the Moose Lodge in Greenfield and later as a receptionist at All About U Family Hair Care also in Greenfield. She also volunteered with the local hospital guild for several years.
Her hobbies included shopping, reading, and redecorating her home. She enjoyed spending time with family. Her family could count on receiving birthday and anniversary cards from her every year.
June was warm, loving, well thought of, and classy. Her home was the neighborhood hangout for her children and their friends. She made sure to have all the best snacks. She made the best Tollhouse cookies and brownies with or without walnuts around.
As her children grew into adults and married, she welcomed each of their spouses into her family with a loving heart. She loved her daughters-in-law and son-in-law as much as she loved her own children. Her grandchildren, great grandchildren and great-great grandchild held a special place in her heart. She was proud of each and every one in her family.
Although small in stature, she was the toughest woman you might ever meet. She raised those six boys and that girl to be respectable members of their communities. She faced every challenge with stubbornness and determination. That’s not to say that she wouldn’t have a breakdown later, but you wouldn’t see it.
She had a myriad of health issues in her later years and faced them with grace and dignity. Never complaining. Always pushing forward. She was simply amazing. A special thank you to Judith Colip for managing June’s healthcare these last many years.
June leaves behind to cherish her memory, her children: Carl (Judith) Colip, Kerry (Kay) Colip, Timothy (Becky) Colip, Jon (Linda) Colip, June (Gregg) Franke, Barry Colip, Brad Colip, and Martin (Barbara) King. She also leaves behind her grandchildren: Kyle (Jang) Colip, Katrina (Jason) Daihl, Scott (Kasey Peters) Colip, Daniel (Rachel) Colip, Jeff (Vicki) Murdoch, Travis (Lindsay) Colip, Jon (Lindsey) Colip, Katie Colip, James (Kimberlee) Colip, William Colip, Nicole Colip, Julie (Samon) Chhim, Jennifer King, eighteen great grandchildren, one great-great grandchild, and niece Kathleen (Ed) Stevens.
She was preceded in death by her parents, husband, Royce King; stepson, Melvin King; stepson, Michael King, and one great granddaughter. She was also preceded in death by her sisters: Neoma Eytchison, Bettie Rhodes, Jane O’Neil and Janet Burns.
June’s family takes comfort in knowing that along with God Almighty, she is in the company of Royce and that “Those Webber Girls” are once again together.
A graveside service will be held at Park Cemetery, Greenfield, Indiana, at 10:00 am on Friday, March 25, 2022. Family requests that you wear any shade of blue in memory of their loved one. June would be so pleased to look down upon us from Heaven to see a sea of blue, her favorite color. Arrangements entrusted to Indiana Funeral Care, Indianapolis, Indiana. Officiant: Pastor Brent Smith, Faith United Methodist Church, Greenfield, Indiana.
Memorial Contributions in memory of June may be made to Hope House, 35 E. Pierson St., Greenfield, IN 46140, or through the DONATE button at: https://www.hancockhopehouse.org/ or St. Jude’s Children’s Hospital, 501 St. Jude Place, Memphis, TN 38105 or the donate button at: https://www.stjude.org/donate/

To order memorial trees or send flowers to the family in memory of A. June King, please visit our flower store.