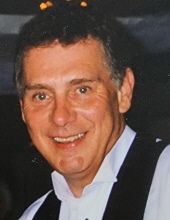 William Scott Goodfellow, age 82, passed away in his home in Indianapolis surrounded by family on Monday, January 31, 2022.

He was born on April 12, 1939, in Philadelphia, Pennsylvania to William & Mary (Jennings) Goodfellow. He was a 1957 graduate from Elmleo High School in Huntingdon Valley, Pennsylvania. He went on to attend Valley Forge Military Academy in Wayne, Pennsylvania where he played football from 1957 to 1958.

Scott was married to Carol Ann Gilespie in 1959 and they had two sons, (Scott & Keith), and a daughter, (Deanna), together. He later married Kathryn Louise Acker in 1972 and they had a daughter, (Dawn), and son, (Adam). Scott had a successful career as a salesman in the foodservice industry before retiring at age 65. He will be remembered most for his booming laugh and sense of humor, as he was always quick with a joke and a smile.

Scott’s hobbies included fishing, reading, gardening, and watching his grandkids do anything! He enjoyed life by spending his time with friends and family, telling stories, teasing his grandkids, and always finding the humor in any situation.

Family, friends, and others that shared a laugh with Scott are invited to visitation at the Greenwood Chapel 2433 East Main Street, Greenwood IN on the afternoon of February 19th from two o’clock to 4 o’clock to celebrate the time shared with him.

A memorial service for close friends and family will be held immediately following at the venue.
To order memorial trees or send flowers to the family in memory of William Scott Goodfellow, please visit our flower store.