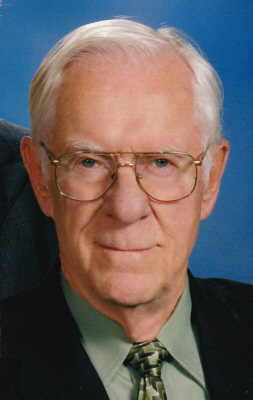 William R. King of Indianapolis passed away on November 30th, 2020. He was born on February 16th, 1928 on a farm in Wiota, Iowa. He was the oldest of three sons born to Lester and Hazel King. In 1947 he married a beautiful Iowa girl named Cora L. (Reynolds) King and remained happily married for over 70 years. They had two children Janet E. (King) Federspill and Paul N. King. He is survived by his wife Cora, Son Paul.

Known by all as "Bill" he graduated from Anita High School and immediately moved to Chicago, IL, and found employment with the RCA Corporation. His career was interrupted briefly by the Korean War where he served in the Army. First, training with the famed 101st Division "Screaming Eagles" and later, serving in Seoul, South Korea with 8th Army Headquarters where he attained the rank of Staff Sergeant. Returning home in 1953 he returned to RCA where he would work for over 40 years, retiring as Manager of Sales Promotion for their Consumer Electronics Division in Indianapolis. Bill was also the co-founder and first Board Chairman of the "Consumer Electronics Show".

Bill was an avid aviation enthusiast and longtime member of the Indianapolis Aero Club and EAA Warbirds Squadron 3. He so enjoyed flying and flew his beloved vintage Beechcraft Bonanza (an airplane he meticulously restored himself) well into his 80's. In retirement, he also was involved in several volunteer organizations. He flew patients for "Angel Flight" whose members provide free air transportation for passengers in need of medical treatment far from home using their own private airplanes for free. He was President of his neighborhood association, served meals at Wheeler Mission, helped build homes for Habitat for Humanity, and spent hours upon hours in his basement woodshop crafting items that he mostly gave to friends and family or donated to various organizations. Bill was a longtime member of Allisonville Christian Church where he and his wife Cora served in many capacities and cheerfully volunteered to help with many church programs.

Private family services are entrusted to Indiana Funeral Care, 8151 Allisonville Rd, Indianapolis, IN 46250. In lieu of flowers please consider a donation to the Indianapolis Aero Club for their aviation scholarship programs, 16 S. Keystone Ave, Indianapolis, IN 46201.
To order memorial trees or send flowers to the family in memory of William Raymond King, please visit our flower store.