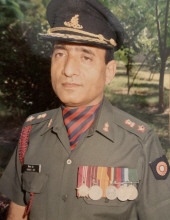 Vishwa Dev Rattan, affectionately known as “Dave” to his friends, age 72, passed away on Friday, April 17, 2020. He was born in Shimla, India on July 27, 1947. Dave pursued a career in the Indian Army and rose to the rank of Lieutenant Colonel. He retired from the Indian Army in 1994 to immigrate to the United States with his family in pursuit of the American dream. His family settled in New Castle, Indiana while Dave worked to become a small business owner in Greensburg, Indiana. Through his hard work and determination, Dave built a successful life for himself and his family. He also became a fixture in Greensburg, making many friends over the past two decades, and, having come to love the area and the people, eventually moved there. Dave enjoyed going to work and seeing the friends he had made through the years. He was also an avid animal lover, especially his dogs Casper, Koko, and Princess. Our beloved Dave will be missed and survived by his wife of 45 years, Lata Rattan, his son and daughter, Abhay and Natasha, as well as his four grandchildren Sienna (age 9), Nora Bella (age 8), Asher (age 6), and Nevin (11 months).

Condolences may be sent to the website below. In lieu of flowers, memorial contributions can also be made, if you so choose, at the website to help support and find a home for Dave’s surviving dog, Princess.

https://everloved.com/life-of/vishwa-rattan/
To order memorial trees or send flowers to the family in memory of Vishwa Dev Rattan, please visit our flower store.