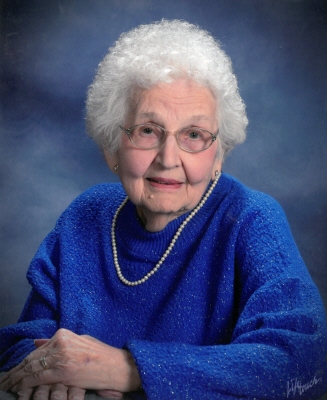 Vera Ann (Veronica Anna) was born to her Hungarian parents, Michael and Veronica Rejko, on April 27, 1925, in the back of her father’s shoe shop on Massachusetts Avenue in Indianapolis, where her family was living at that time. She was the only girl in the family and had five older brothers and one younger.

The family moved to the far east side of Indianapolis where Vera Ann grew up. She graduated from Warren Central High School in 1943.

She married her husband, George “Salty” Schopp on June 19, 1948. In 1952, George and three of Vera’s brothers built a home in Wanamaker where they raised their family and also cared for Vera’s mother for many years. They were married for 28 years until George’s death in 1976.

Throughout her life, Vera worked for various insurance agencies and was the bookkeeper of the Indianapolis Senior Citizens Center until her retirement in 1991.

She was known for her wonderful cooking and baking skills and crocheted hundreds of baby blankets for various charities. She enjoyed word puzzles and jigsaw puzzles and faithfully followed the Chicago Cubs. She was a member of Nativity Catholic Church since 1952, and was a founding member and served as treasurer for many years of their Over 50 Club.

Above all, Vera loved her family – her parents, her brothers and their wives, her many nieces and nephews, her children, her grandchildren, and her great-grandchildren. She faithfully remembered the birthdays of everyone in her large family. She planned family reunions and birthday parties, and hosted Thanksgiving, Christmas, and Easter dinners annually for many years often inviting extended family to her home. She spent many hours reading to her grandchildren and playing card games with them. Her great-grandchildren brought her much joy in her last years.

She was preceded in death by her parents, and all her brothers, and her husband. She is survived by her children, Mike (Paula) Schopp and Susanne (Mark) Hart, 11 grandchildren, and 24 (soon to be 25) great-grandchildren, sister-in-law Wanda Rejko, and many nieces and nephews.

Her family is so very grateful to God for giving her to us and for her almost 97 years of life. We are thankful for all who loved her and helped care for her especially in these last years.

Her funeral service will be held on Friday, February 25th, at 11:00 AM at Indiana Funeral Care, 2433 E. Main Street, Greenwood, IN, with visitation beginning at 10:00 AM. Burial will be at Calvary Cemetery in Indianapolis.

Memorial contributions may be made to Birthline (1435 N. Illinois Street, Indianapolis, IN), an agency providing material support for pregnant women and mothers of infants in need.
To order memorial trees or send flowers to the family in memory of Vera Ann (Rejko) Schopp, please visit our flower store.