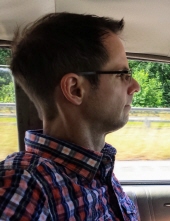 Tim was born Timothy Michael Jackson in 1971, to parents Terry and Geraldine Jackson in Dayton, Ohio. Growing up alongside his younger brother, Todd, Tim cherished his family and their time together. He also held fond memories of attending summer camps for children with diabetes and later returning as a camp counselor. Throughout his lifetime, Tim had a passion for helping and teaching others.

In college, Tim studied a variety of subjects, from engineering to the arts. He earned his Bachelor of Fine Arts degree from Ohio University. He enjoyed film photography, old cameras, and working in a dark room. Tim had a talent for all things mechanical and a love for all things with wheels. He treasured the time he spent tinkering in the garage and sharing knowledge with his son, Oliver. Some of Tim’s happiest moments involved adventures in Volkswagens, riding his Vespa scooter, and road trips in a 1963 Pontiac Catalina Safari station wagon with his family.

Tim and his wife, Melissa, first met when they were fourteen years old. Years after their high school graduation, they reconnected and were married in 1999. They built a life together in Indianapolis, sharing a love for the arts, nature, and travel. Oliver, their son born in 2006, is the greatest love of their lives.

In his career, Tim worked in commercial photofinishing, car and motorcycle/scooter sales, and most recently the mortgage industry. He was grateful to be part of the Freedom Mortgage Corporation, where he received tremendous support throughout the course of his illness. Tim was diagnosed with idiopathic pulmonary fibrosis in early 2016. In March 2019, he received a double lung transplant at the University of Pittsburgh Medical Center. While Tim’s transplant journey was complicated, his family is forever grateful for this gift of life and the expert medical care at UPMC.

Tim is survived by his wife, Melissa, his son, Oliver, his mother, Geraldine, and his brother, Todd. He is also mourned by aunts, uncles, cousins, in-laws, and many dear family members and friends. Tim’s father and role model, Terry, passed away in 2018.

Flowers can not be received at the IMS Museum. In lieu of flowers, the family requests that donations be made to an education fund for Oliver Jackson, https://gofund.me/1407e128, or the UPMC Family House, https://familyhouse.org/upmc/.
To order memorial trees or send flowers to the family in memory of Timothy Michael Jackson, please visit our flower store.