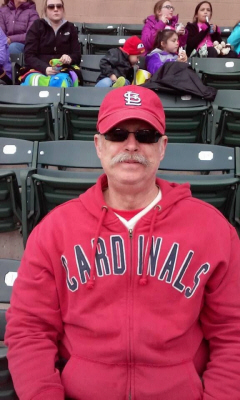 Thomas Raymond Harmon, "Tom," passed away at home in the evening hours on January 26, 2022 at the age of 72. Tom was one of a kind and will be deeply missed by all who had the pleasure of knowing him. He was a caring father, grandfather, uncle, cousin, and friend. Tom will be remembered for many things: being a proud veteran who continued to serve the Army National Guard as a civilian for many years after his active-duty retirement; a baseball fanatic devoted to the St. Louis Cardinals, and sometimes Chicago White Sox (doing anything to irk Cubs fans); an avid reader with a wealth of knowledge on pretty much every subject, especially military history (he claimed that before he entered high school he had read every book related to the military in the Greenville, IL public library); a prodigious consumer of Starbucks iced tea ("Large", as he refused to say Trenta, with light ice, no water); proudly being a pretty terrible driver; a Jazz aficionado; a devoted patron of selected local eateries at which he became a familiar face; a museum goer; and a good-natured sharp sarcastic wit.

He was preceded in death by his parents and his youngest brother, Danny. Each New Year's Eve, Tom celebrated those he loved, those living and those who had passed, with a commemorative shot of Irish Whiskey and a toast, "Slainte!" Feel free to raise a glass to Tom. "Slainte!"

A celebration of life will be on Friday, February 11th at Indiana Funeral Care, Greenwood Chapel. Visitation from 1300-1600. Honor Guard at 1600.
In lieu of flowers, please attend a baseball game with friends and family, and donate to Gleaners Food Bank of Indiana, the Audubon Society, Fisher House Foundation, or the Commemorative Air Force (they maintain the B-29 FiFi).
To order memorial trees or send flowers to the family in memory of Thomas Raymond Harmon, please visit our flower store.