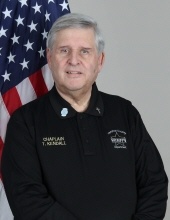 Thomas Richard Kendall, 70, of Carmel IN, passed away Tuesday November 26th 2019 at St. Vincent Hospital, Indianapolis IN, surrounded by his family and close friends after fighting cancer. He was a devout born again Christian who praised the name of Jesus up to the very end.

He is survived by his wife Elliott-Noelle, his three daughters Jennifer Morris, Lauren Dawson (Adam), and Marisa Kendall, and his eight grandchildren.

Thomas retired from the business world where he was involved in technology, expert systems and personality testing. He was active in ministry, chaplaincy, and local government up until the end.

Thomas received numerous awards including the Range Line Pioneer Award (1994), The Servant’s Heart Award (2014), and family will be receiving the Pillar of the Community Award on his behalf at Christkindlmarkt December 7th at noon from the Carmel Mayor. Anyone who would like to attend is invited.

The funeral and visitation will be held on Tuesday, December 3rd at Horizon Christian Fellowship, 7702 Indian Lake Road, Indpls 46236 with the visitation from 10am-1pm followed by the funeral at 1pm. There will be a procession to Carmel Cemetery, 951 N Rangeline Road, Carmel 46032.

In lieu of flowers, please send donations to the Hamilton County Sheriff’s Chaplaincy made out to HCS Chaplaincy, 18100 Cumberland Rd., Noblesville, IN 46060.
To order memorial trees or send flowers to the family in memory of Thomas R. Kendall, please visit our flower store.