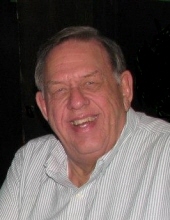 Thomas (Tom) Fricke, age 79, departed this life Friday, May 7,2021 at Community Hospital North in Indianapolis. He was a resident of Greenwood for 43 years.

Tom was born November 15, 1941 to Wilber and Niona (Kellermeyer) Fricke in Celina, Ohio. He grew up in New Bremen, Ohio and was a graduate of New Bremen High School class of 1959. Tom joined the United States Air Force in 1964 where he was a Weapons Control Systems Mechanic and worked on the F106.

Tom was united in holy matrimony to his faithful and supportive wife, Florence (Flo) Schrank, in July of 1967. This union was blessed with two children, Brent and Christa Fricke, who is married to Todd Piecuch. He was also blessed with two amazing grandsons, Logan and Alex, from his son and Abby (Kear) Fricke. He was preceded in death by his son, Brent, on December 15, 2012.

Tom was an active member of the Barbershop Harmony Society for 53 years and the American Legion Post #1919. Tom earned Barbershopper of the Year on two occasions and was the Chorus Manager for the Columbus-Greenwood Chordlighters. His passion for Barbershop over the years reflected in his participation, contribution, and support of his fellow Barbershoppers and the craft.

His kindness, sense of humor, and big personality will forever be cherished in the lives that he touched, his friends, and his family.

In lieu of flowers and cards, the family requests that donations be made to the Columbus-Greenwood Chordlighters to help continue his passion to enrich lives through singing Barbershop music. Donations can be made through GoFundMe: https://www.gofundme.com/f/keep-central-indiana-singing?qid=b017f35ba75f46513e74ad00f9cfeab5&utm_campaign=p_cp_url&utm_medium=os&utm_source=customer

Arrangements have been entrusted to Indiana Funeral Care.
To order memorial trees or send flowers to the family in memory of Thomas Gene Fricke, please visit our flower store.