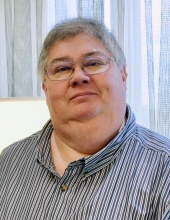 Thomas Dyer died at Community North Hospital on November 9, 2020, a victim of COVID-19 and its many complications, one of over 280,000 Americans who have died to date. #WearAMask #ProtectOthers From the time he was taken away by ambulance, until just before life support was removed, he was alone, with his family missing him every moment.

Tom was born September 5, 1958 in St Louis MO to Donald and Marian Dyer. His family moved to Davenport IA where Tom spent his childhood until leaving for college. An avid sports fan from a young age, Tom worshipped the St Louis Cardinals baseball team, especially Bob Gibson, and the Minnesota Vikings football team. He played football and golf during high school, with his high school football coach yelling to the team, “You’re not done running steps until Dyer is done running steps!” This produced a loud groan, as Tom was a husky youth, but he would not acquire his nickname of “Roundman” until he left college and began working.

After graduation, Tom began his career with Osco Drugs as a Management trainee, transferring to different stores in Iowa, Kentucky, Indiana, Tennessee and Illinois as he moved up the management chain. His first assignment as Store Manager was at a store on Lamar Avenue in Memphis TN and his final store assignment was at 38th and Post Road here in Indianapolis IN where Tom had moved to be closer to family, his wife’s family. Not only did Osco provide a career path, but it is where Tom met Kelly, of whom he once confided to a friend “I’d like to fire her, so I could date her.” While working together in Evansville the two shared an office, but little else, as Tom found it hilarious to torment Kelly endlessly. But Tom was transferred to Memphis, where the date eventually took place, without the firing, leading marriage in October 1988 in Newburgh, IN. The date was chosen carefully after consulting both the Iowa and UNI football schedules. The happy couple set up housekeeping in Burlington IA as Kelly became the “trailing spouse” during every new store assignment. Nine years later, after their transfer to Indianapolis, the couple welcomed a son, Eric. The focus of Tom’s life shifted immediately and not long after Eric’s arrival, Tom’s career at Osco ended, leading to employment at CVS, Sears, Community Corrections (Human Resources Manager) and finally to ResCare/Normal Life in Sheridan, IN (Business Manager)

The next years were filled with sharing his love of sports with his only child. Eric’s first word was “ball” and hockey and football were favorites of the men of the house. There are many, many photos of the two super fans in various jerseys. Tom shepherded Eric and his teammates through Little League baseball as a coach, cheered him at cross country and track events and lurked in various neighborhoods and parking lots watching Eric when he began golfing for the high school team. A favorite trip for the two was to Dayton, OH for the beginning of March Madness basketball tournament and a family outing to the Louisville Slugger Museum created lasting memories.

Believing in the twelve points of the Scout Law, Tom signed on as a Cub Scout leader and then as a Boy Scout leader, feeling it was important to be a role model for the young adults that Eric befriended. He continued to serve Troop 275 long after Eric graduated and left for college. Being empty-nesters led to “Roundman” staying home more and spending time with the 4th member of the family, Fiona, a hound mix rescue dog that joined the family in 2012. Many of you know that Tom and Fiona had an iron-clad deal that Fiona got treaty-treats EVERY time an Iowa or University of Northern Iowa team of any sport scored a point. Fiona also tried (unsuccessfully) to keep Tom calm during these sporting events, so that the neighbors didn’t think Kelly was living with a crazy person. Tom was LOUD! His enthusiasm for sports was slightly diminished during the pandemic, but he found the excitement in every sport, including televised corn-hole matches. (And that’s why we have two televisions…)

Tom loved his family and the last big event of his life was a trip with Kelly and Eric to Florida to visit his ailing mother who lived at his brother’s home. We all assumed that it would be the last time we would see her, not remotely imagining it was the last visit we all would be together and Tom would be taken from us shortly after our return home. Tom was preceded in death by his father, Don in 2010. His mother, Marian, followed Tom in death just two weeks after Tom’s passing. Many of you have commented that the three of them just needed to be together, knowing that those of us left behind would manage as best we could.

Tom is survived by Kelly, his wife of 32 years, his son Eric Thomas, and his brother Tim Dyer (Max Bond). According to his wishes, Tom was cremated and in 2021 his ashes will be interred in Deming, New Mexico along with his mother’s, joining his father and his grandmother. A Celebration of Tom’s life will be held when it is finally safe to gather and we will laugh and cry together.

Kelly, Eric, and Fiona thank those who have shared condolences for our loss of Tom and wish you peace as we wait for the end of this tragic year and hope for a better 2021. In Tom’s memory we ask that you pet your dog or cat, buy coffee for the person behind you, let someone merge in front of you in traffic and JUST BE KIND.
To order memorial trees or send flowers to the family in memory of Thomas Dyer, please visit our flower store.