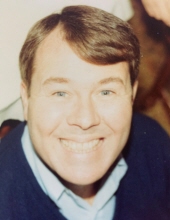 After a long illness, Stephen Ray McCullough died Tuesday morning, May 3, 2022 at his home in Willow Springs Nursing Center in Indianapolis.

Steve was born on November 22, 1944 to Ray and Helen Walker McCullough. He graduated from Broad Ripple High School and was a member of ROTC. He also attended Indiana State University in Terre Haute, Indiana. Steve was an awesome salesman and spent his career working in mostly automotive sales.

Steve married the love of his life Sheila Wimmer on May 22, 1976. Sheila and Steve built their home just a few blocks away from his parents Ray and Helen. They enjoyed a very close relationship. Steve especially loved golfing with his dad Ray. Ray and Helen fell in love with Sheila almost as quickly as Steve did. Sheila held a special place in Ray’s heart. They were all thrilled at the birth of Steve and Sheila’s daughter Meredith and their son Grant. Steve loved his grandchildren deeply; they are Meredith’s children Sonja and Aiden, and Grant’s children Sheila and Nicolas.

The entire family attended Allisonville Disciples of Christ Christian Church and loved their church family. Steve was a past deacon. He was faithful in attending church with his children even after the death of his wife Sheila.

After the death of his wife Sheila, Steve spent his time with his children. He loved playing baseball with Grant and coaching him. Still today, he would tell everyone as a proud father “how good Grant was at baseball.” Steve was a great cook and spent a lot of time in the kitchen cooking with Meredith. He loved Mallard ducks and collected mementos of mallards.

Steve loved fishing with Uncle Bud Bauer. He loved to play weekly cards with his lifetime friends Fred Ballinger, David Cash, Robert Cash, and Clark Bordner. All of Steve’s family would like to thank Fred Ballinger for his loyal friendship and his dedication to helping with Steph’s care.

Steve is survived by his daughter Meredith McCullough Stone (Michael), her children Sonja and Aiden Stone, his grandchildren Nicolas and Sheila McCullough; and several cousins.

Thank you to Compassus Hospice Care of St. Vincents, especially Adina, Kim, and Carol. Thank you to Nautyn and Amy at Willow Springs. The family requests in leu of flowers donations be made to Allisonville Disciples of Christ Christian Church, and or to Susan G. Koman Cancer Research.

A funeral service will be held at Noon on Thursday, May 5 at Indiana Funeral Care, Harry W Moore Chapel. Friends may call from 11 a.m. until service time. Steph will be laid to rest at Oaklawn Memorial Gardens.
To order memorial trees or send flowers to the family in memory of Stephen Ray McCullough, please visit our flower store.