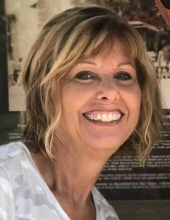 Shelley Marie Radcliff passed away due to the covid 19 virus June 28th, 2020 7:41pm at 61 years of age. Leaving behind her husband William Radcliff, 2 children Levi and Kelley Radcliff, sister Rene Depew, stepdaughter Erin Ward Ed Ward and grandchildren Rylan, Kyler, and Kamryn Ward. Born to Robert and Pat Hemmerly April 9th, 1959 in Tiffin, Ohio she was an avid water skier many times showing the boys how it’s done. She was a strong, self-sufficient woman as she moved to many new states throughout her young adulthood by herself without any assistance. In Texas, she met pastors Ed and Beth where she began to learn the word of God, which would dramatically change her outlook on life and the world for the better. Eventually moving with them all the way to Indiana where she met the love of her life at Karle Farms I, as her son, know how much she must’ve loved dad because she pretended to like racing for a long time just to hang out with him, and now looking back I can imagine how uninterested in the racing she was and how interested in dad she was. She was a devoted mother and wife, quitting her stable job at a salon in town to start her own so that she could stay home with Kelley and I. She was the harder of the two parents but she was also the softer of the two parents, she’d be the first to punish you when you did something wrong but she was also the first to ease up on the “previously agreed upon” punishment because she couldn’t stand to see us in trouble for long. She was a positive influence on so many lives. Those who got their hair done by my mom didn’t come in to get their hair done; they came in to see a friend, they came in to catch up, they came in for a therapy session, and sometimes they came in when mom needed the therapy session, it just so happened that she also cut their hair while they were there. She opened up her home to a classmate of mine who was going through a hard time at his home, she mentored him as much as she knew how and tried to help him see a different, hopefully better lifestyle. He’s gone on to becoming a superb human through his own experience and life decisions, but I like to think she had a positive impact. She battled a life stealing disease for the last 14 years of her existence without complaining once, she battled quietly, alone, without asking for help because she knew it was her battle and didn’t want to involve anyone else. The only time she asked for help is when dad had to carry her to the car to get to the emergency room a couple years ago because she literally couldn’t stand without losing her ability to breathe. And about 3 days later she was back downstairs working, cleaning, mowing the lawn, taking care of the finances. She was incredible and a nonstop worker. She taught us about responsibility and dutifulness with her actions and she gave advice and wisdom with her voice. Mom you will be dearly missed by so many friends and family, I can’t even begin to start the list of how many people are affected by this tragic loss. We all love you, thank you so much for everything.
RIP Shelley Marie Radcliff.
To order memorial trees or send flowers to the family in memory of Shelley Marie Radcliff, please visit our flower store.