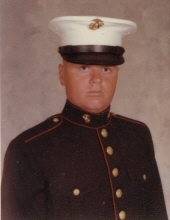 Russell Galen Smith, 63 of Logansport, IN, died in the early morning hours, today in his residence. He had fought a very short courageous battle with liver cancer.
Born July 20, 1958 in Logansport, IN, he was the son of the late Glenn L. Smith and Mabel A. DeFord Smith.
Rusty graduated from Pioneer Jr-Sr High School in Royal Center, IN in May of 1976. He had already enlisted and left for basic training with the United State Marines in June of 1976. He spent the next four years traveling the world and playing with The United States Marine Drum and Bugle Corp, as a soprano bugler.
He returned home the first week of July in 1980. He celebrated his 22nd birthday on July 20th. On the first day of August 1980, he was involved in a motorcycle accident and was paralyzed from the chest down.
He underwent an unbelievable number of surgeries that would allow him to sit up. He spent the rest of his life in a wheelchair, dealing with all the issues we all face on a daily basis plus the many that the rest of us can only imagine. He was our unsung hero for serving his country and then trudging through life with the added burden of being paralyzed.
Surviving are one sister, DeAnna S. Lamb, Logansport, IN; two brothers, Richard G. Smith (Ann), Sparta TN; Robert G. Smith (Dallas), Noblesville, IN; one half-brother Glenn (Carol), Fort Myers, FL; one nephew, Dana A. Brown (Deborah) Barnesville, GA; one niece, Kristeen A. Otterman, Noblesville, IN.
He was preceded in death by his parents and on half-brother, James Smith.
There will be no visitation or services with Indiana Funeral Care of Indianapolis, IN in charge of cremation. He will be entombed in the Marion National Cemetery, Marion, IN.
To order memorial trees or send flowers to the family in memory of Russell G Smith, please visit our flower store.