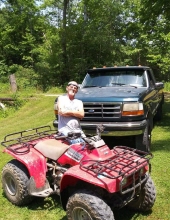 Roger Allen Thompson died peacefully at his home on Wednesday March 2nd, 2022 in Indianapolis, Indiana. He was surrounded by his daughters and family at his bedside, he couldn't have asked for much more than that.

Roger was born on April 15, 1954, in Warren, Ohio to Ethel and Henry Thompson. He was one of five children. He also attended school at the Indianapolis School for the Deaf which he was always proud of and made yearly trips back to visit on PTCO days. He was also a member of the Deaf Club located in Indianapolis and attended multiple yearly events that were held for the deaf.

As anyone who truly knew him would say that he was a huge sports fan. He loved Notre Dame, the Chicago Bears, IU basketball, the Cubs, Greenbay Packers, and the Pacers. You could always find him watching sports at any given time. He loved the outdoors, especially being in West Virginia, riding his four-wheeler.

Out of everything he loved and enjoying doing, he loved being a father and grandfather more than anything. He had three daughters Jennifer (Johnnie) Byrkett, Jessica (Joel) Hohn, and Julia (Cory) Moon. He was the most amazing father and was always so proud of his daughters. He had nine grandchildren whom he was beyond the best grandfather for. He couldn't wait to see them or spend time with them.

Roger will be forever missed for his amazing personality and his gift for making anyone smile and laugh. He had a tremendous number of friends that most were lifelong. He honestly had a sweet soul that cannot be replaced. He was a loving and amazing father, grandfather, and brother.
Roger is preceded in death by his mother Ethel (Bob) Stone, father Henry Edison Thompson, grandchild Gavin Osbon, and sister Cheryl Morgan.

He will forever be missed for the funny, goofy, and overall amazing person that he was. Until we meet again, we love you.

Our family would like to give a huge thank you to his friend Bert Pickell and Roger's brother Kenny, who went above and beyond for our father. For being there and taking care of him when he needed it the most. We cannot begin to thank you for all you have done, and I know Roger is looking down and thanking you for all you have done all the way to the end. From our family to you, we thank you.
To order memorial trees or send flowers to the family in memory of Roger Allen Thompson, please visit our flower store.