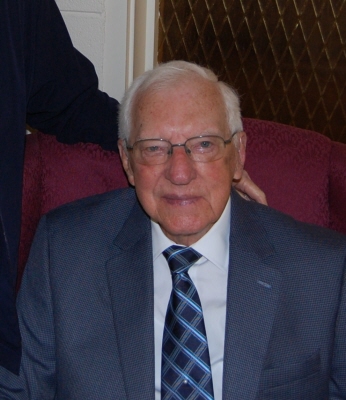 Robert "Bob" Miller passed away on Tuesday, April 6, 2021, after a short illness. Bob was born August 3, 1924 in Indianapolis, In., one of six boys. He attended Washington High School before going into the service and enjoyed playing basketball. While serving in the Air Force, Bob was trained to operate airport crash trucks. Attending a USO dance in Halls, Tn., (near Dyersburg) allowed him to meet his future wife, Alma Miller. They married before Bob was shipped overseas - she was of age, but Bob had to have his mother's permission.

Upon discharge from the service, Bob secured a job with the VA where he was eventually influenced to attend college. He obtained his Electrical Engineering degree from Purdue University. They had a daughter, Linda, and is predeceased by their son, Robert Jr. Work took the Millers to Wagner Electric in the St. Louis area, then in 1975 resulted in a move to Mt. Vernon. Bob worked for Dowzer Electric for 15 years before retiring.

First Baptist Church became their long-time church home. Bob served as Council Chair, Chair of the Deacons/esses and on the Worship Committee. He was a faithful choir member and was a longtime member of a barbershop quartet. Both he and Alma were active in the weekly Brown Bag program with Bob serving as liaison with the schools.

Bob and Alma moved to Indianapolis in 2018 to be closer to family. He is survived by his brothers James, Ronald and Bill Warrum. He is predeceased by his brothers John and Richard Warrum. Linda and husband Jim, live in Florida. They have three grandchildren Karin Thornton, Nikki Richards and Bryce Archer and 11 great grandchildren.
To order memorial trees or send flowers to the family in memory of Robert Miller, please visit our flower store.