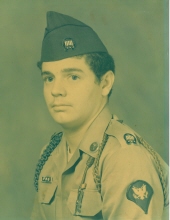 In memory of our beloved father and grandfather, Robert Gene Bonner 70, of Zionsville, Indiana who was called to heaven to join the love of his life, Joyce (or Joy as he so fondly referred to her) on June 9, 2021. Bob was born on February 2, 1951, to the late Gene and Dorothy Bonner in Wheeling, West Virginia.
He proudly served in the United States Army and was honorably discharged in 1969. He graciously provided for his family through various professions throughout the years. Most of his career was spent being a truck driver and exploring the open road. He was a proud man and did not mind telling everyone he was a pig hauler and enjoyed his line of work. He drove a semi-truck for over 20 years and eventually retired from McCord’s Trucking. During his years on the road, he was often accompanied by his wife Joyce who also loved natures highway. That is when she could get away from the 5 children who she loved dearly, but also needed a break from time to time. While traveling through many parts of the United States their radio handles were “Paddle Foot”, and his’ radio handle was “Outlaw”.
He was an avid fisherman who enjoyed being outdoors and had a hefty collection of fishing equipment to prove it. Bob and Joyce were known to take extended family camping trips and fellow campers would be astounded at how their campsite was so proficiently set-up. He was a skilled handyman and would keep busy with home improvement projects especially his flower beds. He will be remembered for listening to his eight track tapes of country music and the Beach Boys. He enjoyed spending his spare change on playing the lottery, in particular scratch off tickets. He loved many candies and sweet treats, so much so that he would keep them out of reach by storing them in his special boot box, which his children knew not to get into.
He is survived by his five children, Stacy Wolfe, Kelly Gordon, Bobbi Noe, Gina Craig, and Toby Bonner, alongside with his 10 loving grandchildren: Ashley, Cory, Zachary, Leslie, Anthony, Cole, Caden, Ella, Maddie, and Lauren along with his brother Michael Bonner.
The Bonner Family invites you to celebrate his life at Indiana Funeral Care located at 8151 Allisonville Road, Indianapolis, IN 46250 on Monday, June 14, 2021. Visitation will be held from 9:30 a.m.-12:00 p.m. followed by a funeral service and military honors from 12:00 p.m.-1:00 p.m.
To order memorial trees or send flowers to the family in memory of Robert G. Bonner, please visit our flower store.