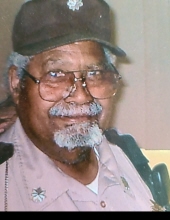 Robert (Bobby) Flynn Bates was born to Louis Bates and Mary Frances Bates(Holt) on March 8, 1928, in Indianapolis, Indiana. He attended Crispus Attucks High School. After graduating from high school in 1946, he enlisted into the United States Air Force. Bobby received an honorable discharge from the service. Once discharged from the U.S. Air Force, Bobby started working for the United States Post Office where he retired after 25 years of service. After he retired he began working as a security guard to keep himself busy.

Bobby married his first wife Florine Jackson and from that union they had 3 children, he later married Gladys Bates who has preceded Bobby is death, he also had a significant other Patricia Ferguson of twenty years before her passing. He leaves his legacy to 2 children; Phlenarrie Bates, GerryWayne Bates (deceased), and Samuel (Sammie) Bates and a host of nieces and nephews.

Bobby also leaves to cherish his memory to his only living sibling, Ida Bates whom he called Sweetie. Who lovingly and graciously took care and protected him the last five years of his life. He is preceded in death by his grandmother Ida Holt, mother Mary Frances Bates(Holt), father Louis Bates, sister Norma Barnes(Bates), his son GerryWayne Bates, and 2 granddaughters Victoria Bates, and Lashonna Bates.

He grew up a devout Catholic and attended St. Peter and Paul Catholic Church. In his later years Bobby faithfully attended Emmanuel Presbyterian Church under the leading of Elder Joseph Matthews.

We say until we meet again, love you Sweetie!
To order memorial trees or send flowers to the family in memory of Robert Flynn Bates, please visit our flower store.