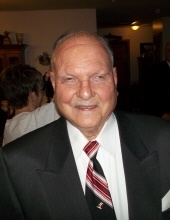 Robert “Bob” Eugene Morgan, 89, of Indianapolis died on Wednesday, March 25, 2020. Bob was born in Heltonville, IN, on April 10, 1930 to the late Howard and Mabel Love Morgan. He attended Bedford High School and joined the Army at the age of 17. He served in World War II and the Korean War.

On December 8, 1965, he was married to Laura Jane Morgan and she preceded him in death on March 2, 1999. Bob retired from General Motors truck and bus after 41 years of employment. Bob enjoyed camping, hiking, hunting and fishing.

A graveside service will be conducted on Monday, March 30, 2020 at 1:00 p.m. at Beech Grove Cemetery in Bedford, IN. In lieu of flowers, memorial contributions may be given to the Leukemia & Lymphoma Society. Arrangements entrusted to Indiana Funeral Care – Greenwood Chapel. Please share memories and condolences online at www.indianafuneralcare.com.
To order memorial trees or send flowers to the family in memory of Robert Eugene Morgan, please visit our flower store.