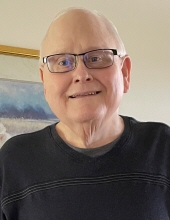 He was born on Saturday, November 29, 1952 in Iowa Falls, Iowa. His birth mother released him for adoption and Donald Bert and Ruth Elizabeth Chrisinger adopted him in 1954.

Richard’s professional career was in the transportation industry. He was employed for several major corporations: Emory Worldwide, Pilot Air Freight, Crouse Cartage Company, and Vitran Express. He served in many supervisor and managerial rolls. He used his analytical skills and enjoyed solving and mitigating claims.

He is preceded in death by his parents, Donald Bert Chrisinger and Ruth Elizabeth Chrisinger; niece, Anne Jones Atal; father-in-law, Richard Hummel; and his dogs, Peppy Jo and Peaches Chrisinger.

Rich enjoyed fly fishing, fly tying, and watching the Green Bay Packers. He adored his Shih Tzus and spending time with them.

A memorial fund has been established in honor of Rich. You may contribute through Indiana Funeral Care, Greenwood Chapel.

Cremation to follow visitation. Burial will be later in Iowa.
To order memorial trees or send flowers to the family in memory of Richard Scott Chrisinger, please visit our flower store.