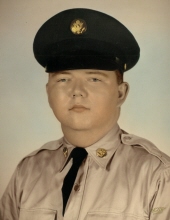 Richard L. Payne, 75, of Indianapolis, passed away at Majestic Care of Avon on January 16, 2021 after a brief battle with cancer.

Richard was born on August 1, 1945 in Indianapolis to Violet and Robert Payne. He graduated from Jackson Central High School in 1963 and then honorably served his country in the United States Army. Upon his return home, he worked for 37 years as an auditor for the State of Indiana. Richard was also a member of The Church of Jesus Christ of Latter-day Saints.

There will be a private viewing for family, followed by a graveside service 1:00pm on Tuesday, January 26, 2021 at Crown Hill Cemetery.
In lieu of flowers, the family is asking for donations to be made to St. Jude Children’s Research Hospital or the American Cancer Society.
To order memorial trees or send flowers to the family in memory of Richard L. Payne, please visit our flower store.