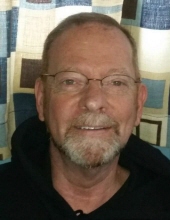 Richard C. (Ricky) Rathbun, passed away peacefully Sunday, October 18, 2020 with his devoted husband at his side. Ricky fought a long and courageous battle with cancer. He stayed determined and maintained a positive attitude throughout, providing encouragement and humor to the staff and others at the cancer center enduring treatments alongside him.
Rick was born the fourth and youngest child of Keith and Betty (Rathbun) Trickler, on May 20, 1958. He attended Daleville Community Schools graduating in 1976, where he was active in the marching band during high school. Playing the trumpet and performing as the Drum Major during his Junior and Senior years.

Having many talents and interests, he held a variety of jobs in his life. Among those included patient care, central supply tech at Ball Memorial Hospital as well as waiting tables and bartending. Rick also studied botany and worked as a floral arranger for a brief time at Cade’s Florist and artistic flower arrangements became an interest and a talent he continued to practice throughout his life. Rick had a keen eye for fine art and stylish dress that was admired by his friends and family. He was a fantastic interior decorator and had a natural eye for design. He kept a beautiful home garden and created many decorative floral arrangements.
Rick not only carried a host of talents, but also had a beautiful spirit. Rick was strong but gentle, kind but firm, and always led with his heart first. He Helped many people in battling addictions and was a pillar in time of need. He was a true friend and is a generous soul.
Upon relocating to Indianapolis in the 1990’s, Rick found recovery from drug and alcohol abuse and an interest in helping others battling the disease of addiction. While working various jobs including sales at Nordstrom and assisting in counseling addicts at various treatment facilities Valle Vista, Options, Community Behavioral Health. Rick studied at Indiana Wesleyan University attaining an Associate Degree in Addictions Studies, and a Bachelors in Addictions Counseling from Martin University in 2014. Most recently, Rick was employed at G4S as a security officer.

He was proceeded in death by his parents Keith Rathbun, and Betty and Jack Trickler.
A celebration of Ricky’s life will be held Saturday, November 7, 2020 at Harry W. Moore Chapel 8151 Allisonville Rd. Indianapolis, IN 46250, Visitation 11:00 A.M. to 1:00 P.M. with Memorial Service at 1:00P.M.
To order memorial trees or send flowers to the family in memory of Richard C Rathbun, please visit our flower store.