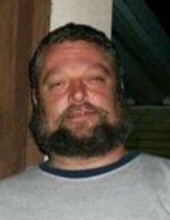 Rhett was born on June 16th, 1965 in Bloomington, Indiana. He enjoyed wrestling for Edgewood High School where he graduated in 1983. After graduation Rhett joined the United States Marine Corp. In 1986, he was a Lance Corporal (LCpl) stationed in Oceanside, California where his only daughter, Amanda, was born.

Rhett took joy in cooking for the homeless, fishing with friends and family, and being a mechanic. On a nice summer day, or evening, you might even see him at a racetrack or doing demolition derby. Rhett was known for his infectious smile and his kind and compassionate spirit.

Rhett is preceded in death by his mother, Patti.

Memorial service will begin at 1:00 pm followed by military honors.
To order memorial trees or send flowers to the family in memory of Rhett Allen Combs, please visit our flower store.