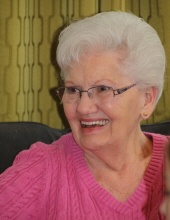 Rachel “Mae” Riggs passed away peacefully on July 9,2021---the same date her daughter, Loine, passed 22 years prior. Mae was born August 19, 1930 to Merton & Marie Anderson in Hutchison, Kansas. She spent many happy years with her brothers and twin sister while growing up in Kansas. Church and music were always center to her life. It was at a church event that she met the love of her life, James Robert Riggs. At age 18 she and “Jim” were married. Their family began a year later with the birth of Loine Marie. And their family was complete with the birth of their second daughter, Debra Kay, three years later.

Mae was an amazing mother to her daughters. She was an accomplished seamstress, making most of the girls’ clothes as they grew up. Cooking and baking were another passion and she was famous for her Christmas parties with unbelievable food and decorations. She also was known as the woman to go to if you needed a wedding cake, including cakes for her granddaughter and grandson’s weddings. Mae loved music and had a beautiful soprano voice, sharing it with her church family with solos throughout the years. She was a perfectionist and anything she did displayed that desire. It was without a doubt a pet peeve of hers that not everyone shared that same “perfectionist” passion. Anything Mae did was done with precision, love and passion.

Mae spent many years as a cafeteria manager at Fermi Labs in Batavia, Illinois where she also spearheaded many company parties for visiting physicists from around the world. She found them interesting but often said that physicists beat to the tune of a different drummer. She continued to work for Fermi labs until her retirement. For a period of time during retirement, Jim and Mae moved to the mountains in North Carolina where they spent several happy years before moving to Fishers, Indiana to be near grandkids.

More important to Mae than any of her many passions was her love for Jim and her family. Always a close family, laughing and doing things together was paramount to their relationship. Late night runs for burgers or treats were common and Sunday dinners were always fun—usually fried chicken or pot roast. Mae and Jim simply enjoyed being together----big vacations or trips were never a big part of their lives. Well at least they weren’t until grandkids come along. The ADORED their grandkids. Never in the world’s history could grandkids be more loved and adored. And any vacation where they could be included was important. There are so many wonderful memories of trips with grandkids sharing so much laughter and shenanigans. The grandkids became adept at talking Grandma and Grandpa into keeping them for a week when they would visit their house for the weekend. When it came time to leave they would sit on Grandma and Grandpas’ porch pouting and crying until Grandma would say---“okay you can stay for the week”. It worked EVERY time. Family was everything.